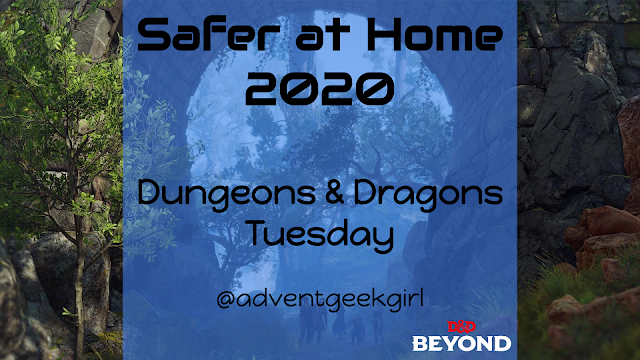 This summer I decided to officially start a Dungeons & Dragons campaign for my daughter. We had dabbled in it before. She made a character on DnD Beyond and I had even run a one-shot for her. With  the COVID-19 Quarantine lifestyle becoming more of something that we'll be living with, I wanted to start something to take advantage of our time together and her excitement to do an roleplaying game.

It would be the three of us, but I thought that would be kind of sad for her, because it's always just the three of us. So I reached out to our family-friend who lives in North Carolina to see if he would join the game. He agreed, much to the delight of my daughter who needs more contact with people who are part of her family.

Once everyone knew they were going to be starting in the campaign, they all worked on their characters. We used DnD Beyond to create the characters and I used some of the it's great features for setting up encounters and organizing how the campaign will unfold. I also decided to use my own character as a backup for the game, but not be an official traveling companion.

My daughter is really into Warrior Cats, so to assume she would be something other than a Tabaxi was silly of me. Well... a Dragonborn would have been the other one. She actually waffled over which one to be.

The adventure I chose was the Tomb of Annihilation. This came out around the time I stopped avidely RPGing, but was something that sounded really cool. It has dinosaurs and zombies and zombie dinosaurs. My daughter loves dinosaurs. I also loved the archaeological component of the campaign and my husband would appreciate being able to explore. I love that DnD Beyond had the book setup so that I could follow along through it and it linked to the creatures, characters, spells, maps, etc. My stress over running campaigns from years ago disappeared.

All day we spent prepping for our first session. Everyone had their backstories set and their connection story, too. We use Google for map sharing and information and all of that. I clipped all the pictures and things that they would need and, as I introduced the story, I hope that landscape unfolded before their eyes.

For our first night, we made it through the initial setup of meeting Syndra and arriving in Chult. They met my character, Millie, as well as some guides while they mingled at their lodgings for the evening. I used Millie as a friend of Syndra who kind of gave them the 411 on Port Nyanzaru. When we meet next, they will be deciding on whether they want to use the guides that Jekotikk met or go a different direction. I've anticipated a potential outcome, but what I'm excited about for next time are the super sweet daily encounters I rolled. This is going to be AWESOME!

Overall, our little group did really well. My daughter is so eager to share and tell her internal story that she is an open book. It is really quite adorable. She's taking to it all quickly and is so excited to have a story and to connect with the other people in the game. Oh my little midgiekins... I hope nothing but the best for you on this adventure.

***EDIT***
This is a few hours after I originally put this up, but I had to add something.

I made a mistake when scheduling our sessions with our friend. I told him every-other-week and my daughter thought it was every week and it made me sad to see her so excited and so distraught. We're at home all summer and we have many weeks to play! So right now I have made the decision to start a second campaign for her to do during the inbetween. I'm making myself a character right now and I've already researched a few campaigns that I might pick up. I'm feeling more Out of the Abyss over Storm King's Thunder or Tales from the Yawning Portal. We'll see. But I can do this.

I know it sounds like quite a bit, but I'm not going to lie... I'm a lazy DM. Hmmm... lazy isn't the right word. I like to use premade content and plan insofar as I can, most of my inspiration coming from in-the-moment. I plan and take time to make sure things are in order, but I do like a little on the fly. My group seems to be alright with it. I'm no Matt Mercer and never will be, but I think I provide an engaging and fun time for my people.

So I'm going to finish up the basics on this character and hopefully tomorrow I'll start to put some pieces into place. My daughter is super excited. Guess what race she's choosing... boy did I call it. 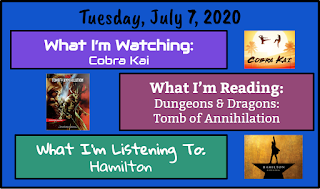