His Valentine to Me

In the previous entry, I talk about the long and tedious gift I created and assembled for my husband. Now it's time to share what he did for me.

I got home from work to this awesome display on my counter: 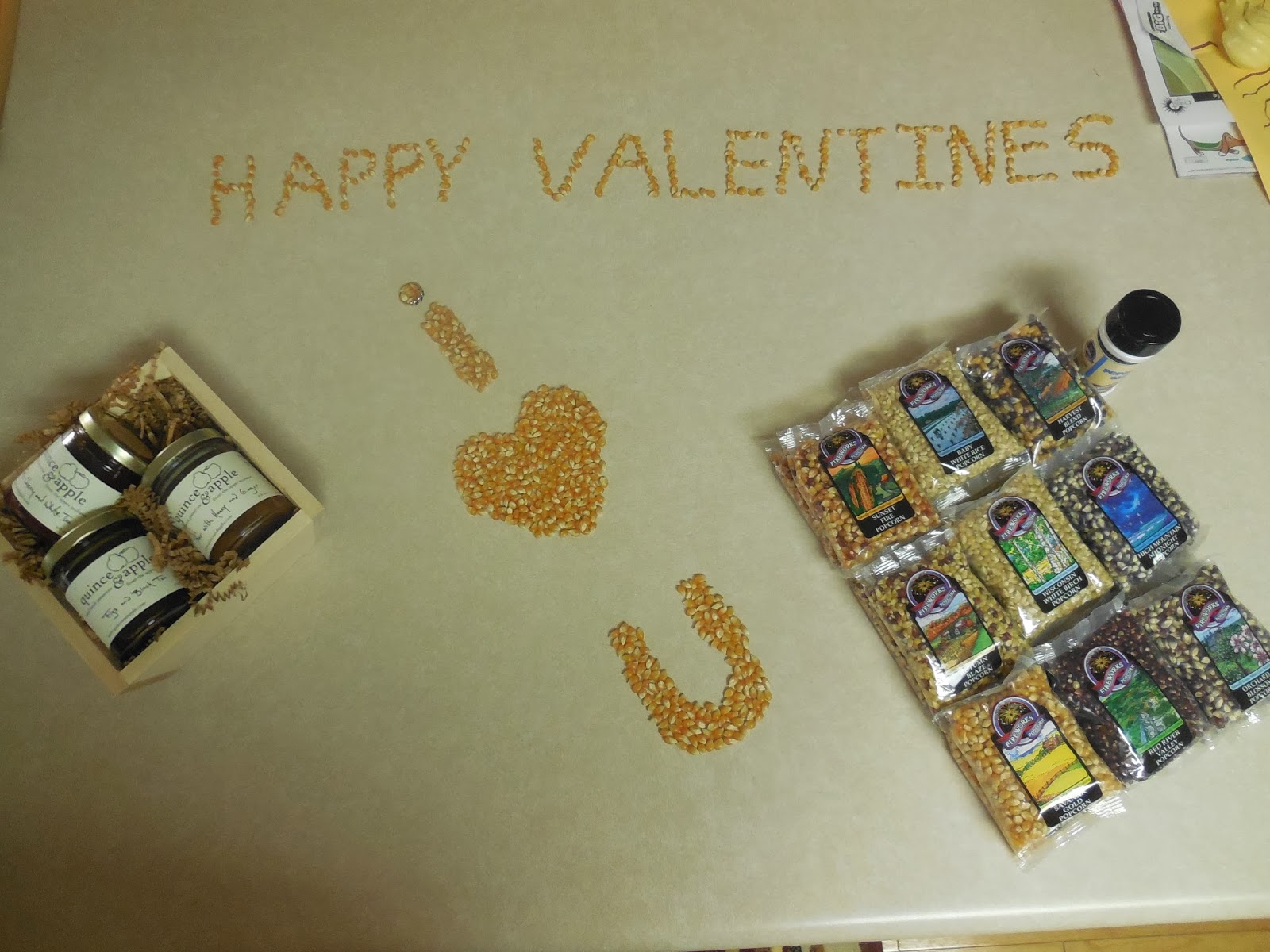 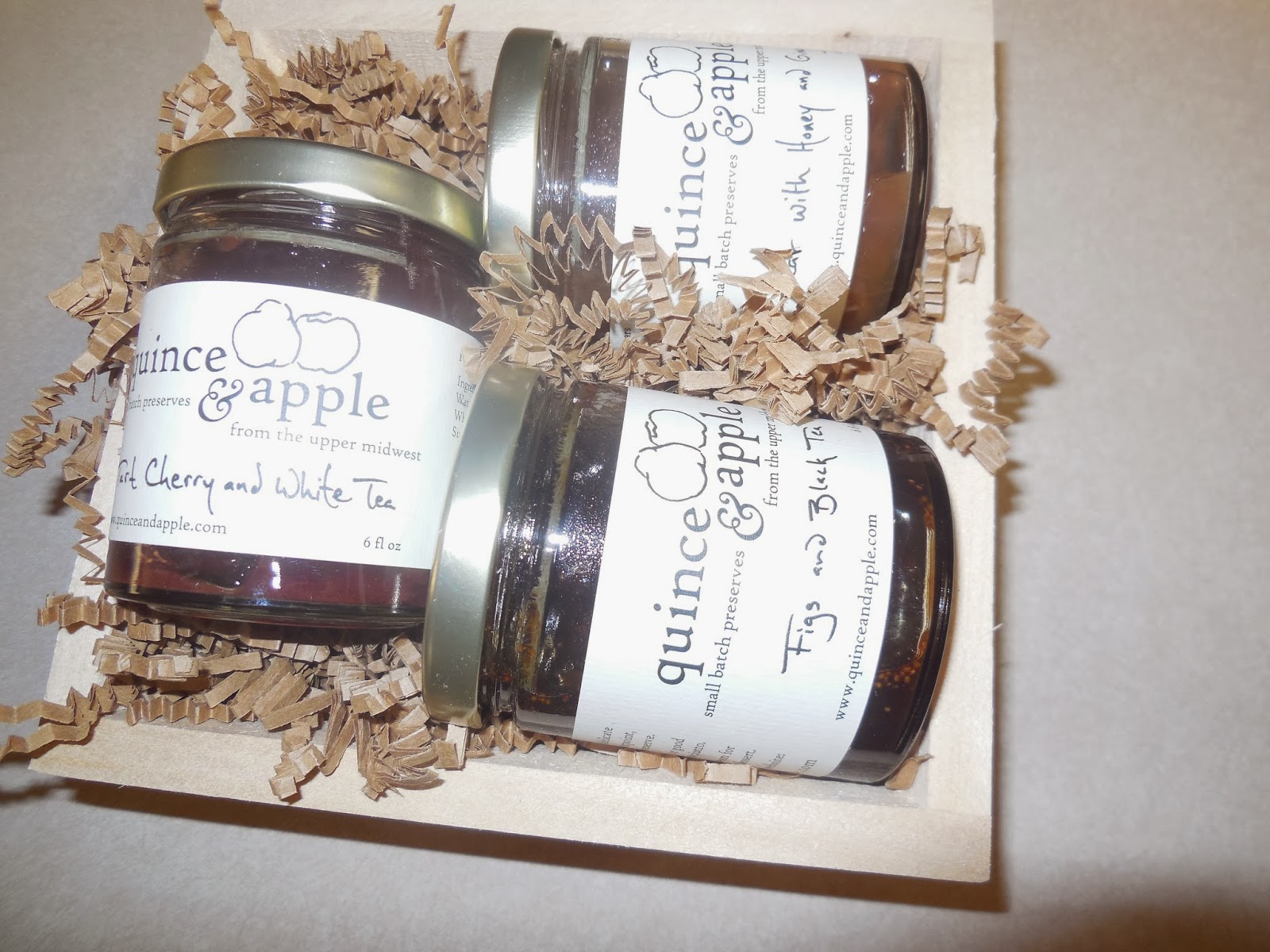 Over the last several months I have taken to popping homemade popcorn. It's healthier, tastier, and. . . well. . . cheaper in the long run. Just like I bought him a tea sampler. . . he bought me a popcorn sampler pack!  Nine different kinds of popcorn, all with different taste profiles. Very awesome. Shockingly, I see us going through this very quickly, because we always have popcorn on hand. It's a great snack.
He also got me tea-based jams. We're going to do some taste-testing, but he saw them and thought it would be interesting to taste a tea-based jam. Long ago, when we first bought a house together, we started drinking tea. I'm not big into coffee, but I wanted a warm drink to enjoy that wasn't hot chocolate. Thus was born an obsession with tea. When we moved to Edinburgh, we were completely consumed by the tea culture. We'd buy loose-leaf teas and make our own combinations and blends. I went to the The Elephant House Cafe (of Harry Potter Fame) and did a tea-tasting. My hubby and I tried different teas with different accoutrements, like the adorable shortbread elephant cookie.  A record was kept about the amount of sugar that was required. . . whether it tasted better with or without creamer and whether it was a good shortbread cookie dipper. I remember looking out the window in the back at the graveyard that supposed holds the grave that inspired the name of Tom Riddle.

As you can see, tea is just part of something that makes the two of us happy. We love trying different flavor combinations and things like that. So instead of beer or wine, we love tasting tea. And I love how, without any hints of anything, our gifts sort of crossed over to reflect our common interests.

It was so super sweet and I was so glad we were able to enjoy a wonderful Valentine's Day together. We didn't go on a trip to Chicago or anything, but we did have a nice weekend at home tasting teas and popcorn with our daughter. We went out to Olive Garden together for "noodles and meatballs" and my daughter and I stopped in a craft store to by some geeky crafts to do together later in the day.

Yeah. . . it was a wonderful surprise. 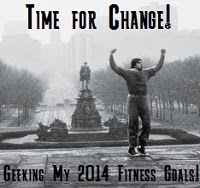 recorded by AdventGeekGirl @ 6:17 PM No comments: 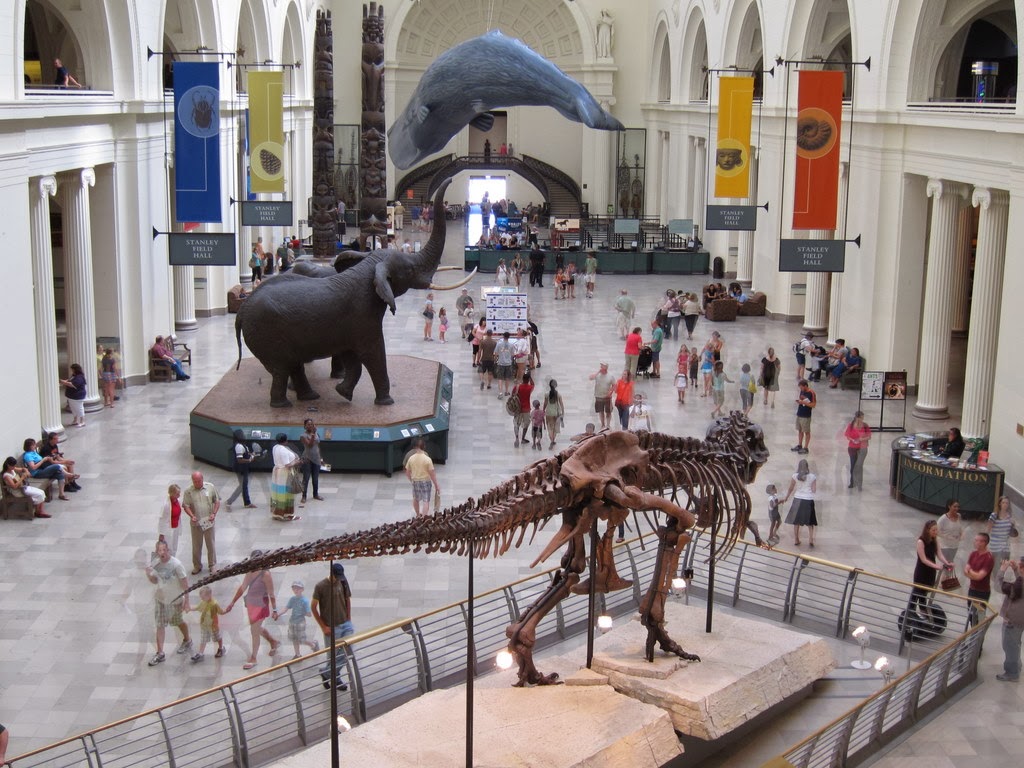 I LOVE Valentine's Day! I also love saying I love it, because it's never for the reason  you would think. So instead of being that jaded person who is like "shouldn't I always show them I love them, not just on one day," I embrace the holiday for simple childhood tradition. My family and my godparents always went to Chicago for a weekend family vacation over Valentine's Day weekend. We'd get those hotel rooms that have a door in-between the rooms. We'd always stay at a place with a pool (usually a Marriott). We'd spend one of the days at either the Shedd Aquarium or the Field Museum. Then we'd always do a "dinner theater" type thing. For example, Medieval Times or we'd go to a dinner with a western or mob mystery theme. I want to say it was like a murder mystery with audience participation, but I was so young and I don't think we participated too much. I know my brother and I were always excited about the story and the performance and the costumes. Because of this, I always looked forward to Valentine's Day weekend.

In addition to this family trip, there was another family tradition I embraced that involved Valentine's Day. I had a great-uncle, his name was John and he was my favorite grandpa's brother, who would send my brother and I a Valentine's Day card and would always write St. in front of the Valentine's on the card. He was a very staunch Catholic and told us the story of the origin of Valentine's Day. When I started being more engaged with researching and understanding religion and denominations, I always held fast to the interesting and elusive story of St. Valentine, much like I hold fast to the story of St. Sebastian. With that, I also refute the naive people who say that Valentine's Day was created by Hallmark. That was Sweetest Day, not Valentine's Day. Valentine's Day is really a day to appreciate the sacrifices we make for that which we've dedicated our lives to and the pursuit of the virtuous thing called true love. He is, after all, the saint of happy marriages.

When I got older and I met my future husband, I still enjoyed saving Valentine's Day weekend for a special weekend. I always went above and beyond for Valentine's Day, too, because it was a time to step aside and honor my happy marriage/relationship. We actually met online through AOL profiles at the end of January in 1997 and we then dubbed February 20th our Anniversary, because according to our chat logs and e-mails, it was roughly the date that we first said, "I love you." I'll talk more about that in my Anniversary entry, since this year is a special year for us. Suffice to say, February was a special month for me not matter what the year was.

Now, take a moment and erase the negative ideas about Valentine's Day from your mind, because beyond this point I am going to be a super geeky gusher of my love for my adorable husband. Well, sort of. . . I'm going to gush about our Valentine's Day this year and how it makes us giggle how much alike we have a tendency to be. 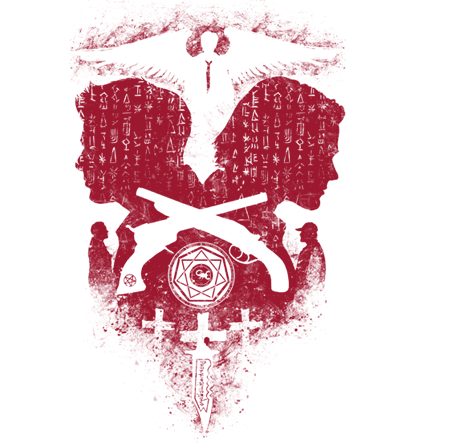 I had planned my Valentine's Day well in advance. I ordered the things that I wanted to give and I LOVE to theme out my gifts. We were having a little bit of distance issues since we had our daughter. It wasn't often that we were able to have mommy-daddy-time or enjoy things together that we both like that also didn't include our daughter. Right after Thanksgiving, though, we found something that we both just enjoyed so much, we immersed ourselves in binge-watching for two months! I had, on a whim, started watching Supernatural through Netflix. I started watching it in the living room on the TV and Ray was around and he got hooked. We were both addicted and couldn't stop watching! 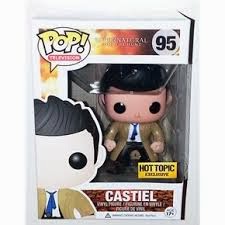 Because we were able to reconnect through watching the show, I thought it would be cute to commemorate that on Valentine's Day. First, I spent a good while trying to win a Castiel Funko-Pop character from NerdFu and finally gave up, because it just wasn't ever going to happen and I was getting tired of posting their stuff all over my personal networks. Not to mention I was getting frustrated having to listen to their shows to find the secret word (Like I have time to listen to them drone on about stuff. . . mom of a toddler. . . teacher with papers to correct. . . my time is precious. . .clearly). I ended up finding a site that sold Castiels for $14.95 and cheap shipping (the price went up since I ordered. . . or maybe I just have a faulty memory. . .who knows anymore).

Then, I found an interesting site through NerdFu and SewGeekAustin called Adiago Tea! This is my new favorite site. SewGeekAustin had some Supernatural themed teas available on the site and I was excited to buy them. I'll admit, though. . . I was a little naive about how the site worked and I was excited to see a Sampler Pack for Supernatural and I thought it was the same teas that SewGeekAustin made. They ended up not being the same and I was upset about it, but it was my own mistake. The sampler tins were super awesome and had most of our favorite characters in it. So I rolled with what I got and lesson learned for next time. 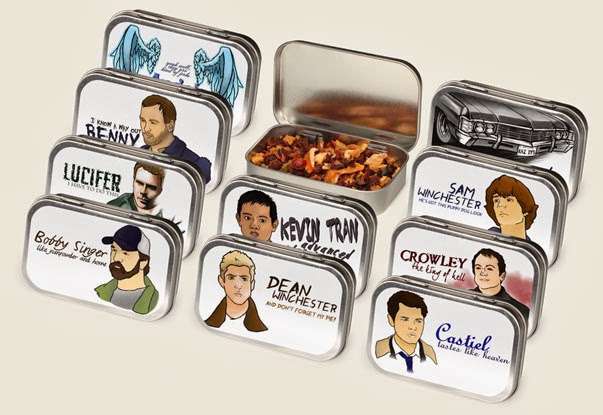 From there my gifts spiraled into a tea downfall. I went to ThinkGeek.com to look for some loose-tea infusers that were geeky. How I missed it on Adiago is beyond me, but I saw the IngenuitTEA infuser cup! YES!!! This thing looked awesome and almost too good to be true. I ordered one and I ordered the ducky infuser just to cover all my bases.

The final piece was a scavenger hunt that I created through my premium Geocaching membership at Geocaching Labs. I called it Hallowed Sentinel and it went like this:

As you know, I always love to theme out your gifts. This year, I wanted to focus on something that I feel helped us to reconnect after some of our rougher moments settling into the new phase of our adult years.
First, you're looking for the home of a aerial craft named Sputnik of Desire. This will lead you to the first gift and the clue to your theme.
Next, go to the place where we store the missing word in this C.S. Lewis quote: “You can never get a cup of ____ large enough or a book long enough to suit me.”
You'll need to find the item that matches this quote if you really want to indulge: “If you live to be a hundred, I want to live to be a hundred minus one day so I never have to live without you.”
Make the one who said this quote and go upstairs for your last surprise: "I'm the one who gripped you tight and raised you from Perdition."
Happy Valentine's Day, my confidante, companion, and lover.

The code he had to put in was the Supernatural License Plate that I wrote and attached to the Castiel doll. A special message showed up that is just for me and him. What I liked about this and how it connected to Supernatural was that it was just like the guys on the show. They have to use bits and pieces they already know to solve a puzzle. I thought it was kind of neat in that awesome sort of way. Each piece had to do with something special to us and he had fun solving the puzzle I made for him.

See what geeky cute thing my husband did for me in the next entry. . . . 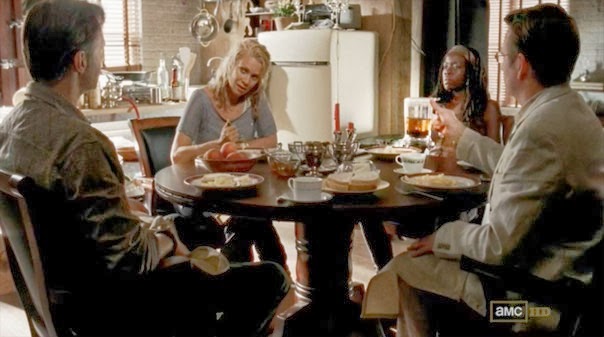 (HILARIOUS NOTE: I had already planned and ordered everything and Ray and I had watched, in full, The Walking Dead. We were rewatching all three seasons on AMC in preparation for the return of Season 4 and. . . I saw the IngenuitTEA being used in Season 3, Episode 3 by Milton when Michonne, Andrea, The Governor and Milton are sitting down to a breakfast together. This was further proof of it being the perfect, meaningful gift for my hubby-do.)

recorded by AdventGeekGirl @ 12:27 PM No comments: