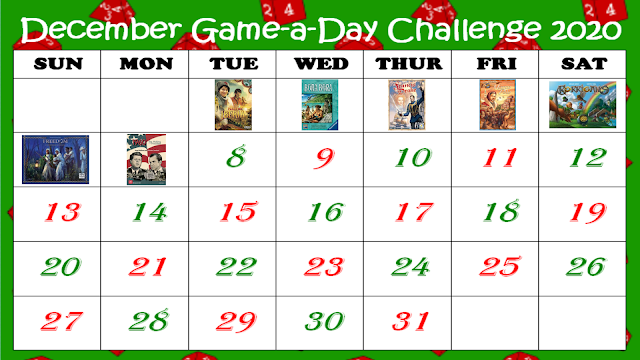 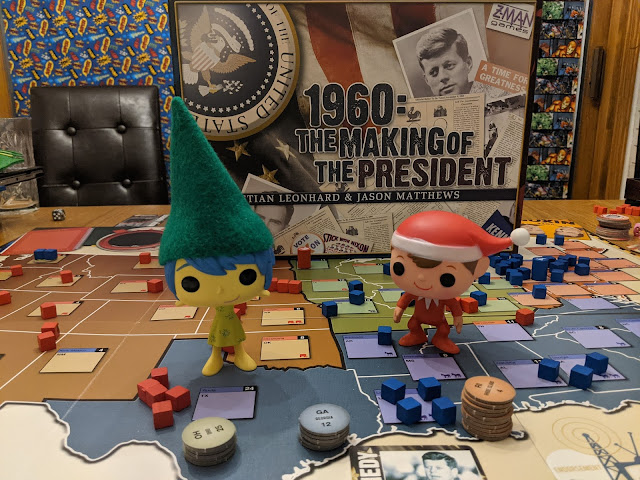 1960: The Making of a President focuses on the election between John F. Kennedy and Richard Nixon. My husband played Nixon and I played Kennedy (randomly assigned). Essentially there is quite a bit of strategy involved in the game. You have to try to secure states to get the electoral votes. You have to think about media support in the various regions (to help you secure states). You have to think about the debate and building up your presence on the primary topics: Economy, Civil Rights, and Defense. And then you also had the think about endorsements. The cards you can use along the way are real events/people during the election and have certain benefits for Nixon, Kennedy, or both. Balance all of those things and use the cards to your advantage and you just might win the election!

I somehow was able to manage all of these things and when we totaled up our electoral votes, I won with 318! I really hung on to some high vote states.

Regardless of the outcome, the game was intense. My anxiety was up with the competitiveness. It was also the first time I played, so I get a little anxious that I'm screwing up. I never expect to win. 1960 really gets into the election vibe and echoes the same excitement as election night. I'd definitely play this again under the right conditions (AKA time to play).

My husband says that it's like Twilight Struggle, but has a mini game in the middle of the game. So if that's you're think, this democratic historical take on strategy, area control, and hand management might be right up your ally.