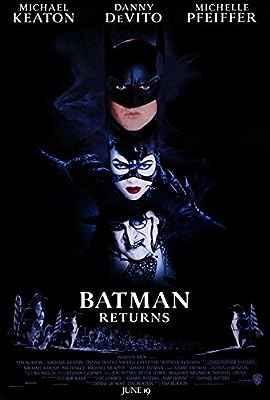 Like Chris Columbus, Burton seems to dabble in the realm of Christmas and Batman Returns is one of those films. I know that Batman is tied into Christmas, because of his backstory, but I don’t know. I watched this film and it didn’t really ring Christmas or any Christmasy things, besides a tree-lighting and a wishing of Merry Christmas. But it does deal with the dark side of people, again. Burton always likes to look at the darker side of things. So setting his film during what is supposed to be an exceptionally festive time of year and then having all these dark things happen creates the juxtaposition that is much better brought out in Edward Scissorhands.

My friend had this on his list of movies to watch, so I decided to include it, but I don’t think I normally would add it to my movie roll.