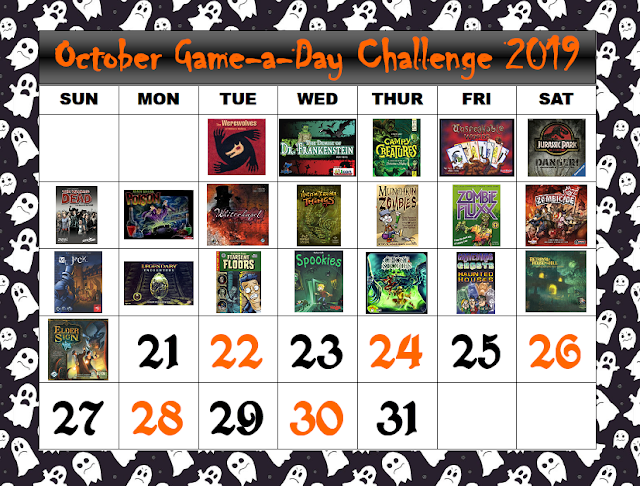 Elder Sign is a cooperative game that inspires terror at midnight! Elder Sign plays 1-8 players, but is best played with 4, if you want to defeat the evil that is unleashed. You encounter spooky locations within a 1926 museum and through the use of dice and special cards try to earn elder signs to aide in battle against the big bad Ancient One, once it is awoken.  You will lose members along the way, but never fear, others will emerge to help the team be victorious against what lurks just past midnight.

I've heard debate over which game is the better Cthulu: Elder Sign, Eldritch Horror, or Arkham Horror. I think Elder Sign is significantly faster and less of an absurd table hog than Arkham Horror. I would argue that Arkham Horror is overly bloated with mechanics that back in 2005 may have seemed cool, because it added to the them, but 14 years later just seem annoying. For that, Elder Sign stands the test of time and the growth of the game industry.

Also, with the outstanding Gates of Arkham expansion, Elder Sign takes you out of the museum and becomes just as thematically city-sprawling as Arkham Horror without adding too much bloat. It is just so much more accessible, especially when introducing people to the genre of games and it is a plus to play with most of my kids. This is an absolutely fantastic game.