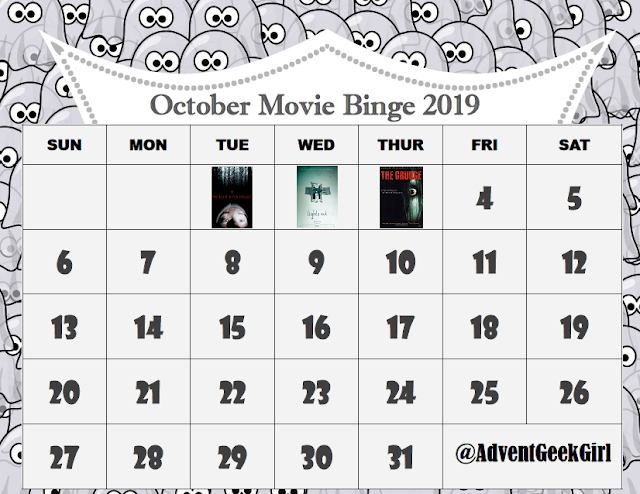 The Grudge (2004) came out during the high point of Japanese Supernatural Horror remakes. It followed its incredibly successful predecessor, The Ring (2002), to become somewhat of an iconic remake. This film, though, more so than The Ring (which I'll be watching later), has far more memorable scares and images for me-- the croaking, cracking ghost with the very unusual walk being the pinnacle of nightmarish images. I learned that her disturbing gait is called the "stutter walk." I also have a completely horrific image that still haunts my nighttime routine to this day. I won't go into detail, but if you're seen the movie you know all about the bed scene. Sleeping this month is going to be very difficult to me.

The nice thing about the remake of The Grudge is that the original, Juon: The Grudge, is just as good. The remake was pretty interesting, with some changes that were made to keep audiences on their toes. The two films, though, have the same feel to them, without the US version feeling like an overt rehash. This is because they have the same director: Takashi Shimizu. He did both the originals and the remakes. Sam Raimi is also attached through these films as a Producer and is produced for us through his production company Ghost House Pictures. Raimi pops up quite a bit in the movies I've selected, but look at that production company name... should I really expect anything else?

I also love watching the whole Grudge and Juon Series. Each adds their own flavor and take. What bothers me as I look back is that the series has fallen under the spell of the Hollywood Remake/Reboot that is completely consuming the film industry right now. So in 2020, The Grudge will be released with a high gloss American shine and a new director powering forward his gruesome take on this groundbreaking change to the way we see malicious spirits.