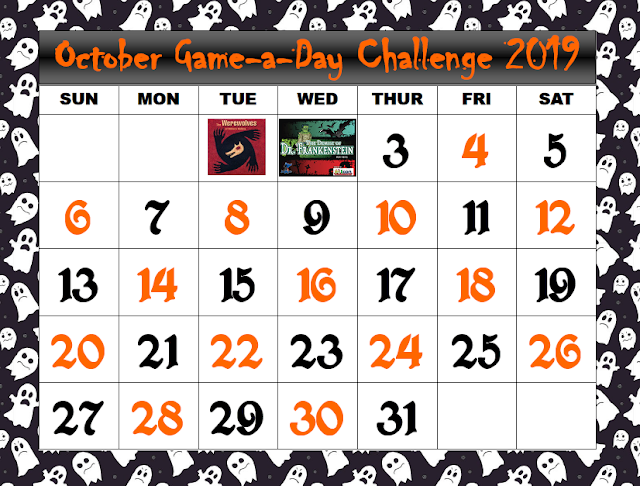 As a student of Romantic Literature (which includes the subgenre of Gothic), I absolutely fell in love with the story of Dr. Frankenstein and his monster. Truthfully, it dates back to some of the oldest storytelling related to reanimation and the dangers of Science from a horror perspective (also known as zombies). So when I was thinking of games that would be great to play in October, The Demise of Dr. Frankenstein was an absolute must.

My husband and I first encountered this game back when we first started attending GenCon. We met Mark Hanny who was hosting several of the games he had made. We weren't aware at the time that we had signed up for so many of his games, but we had a ball getting to know him and learning about his wonderful creations. The Demise of Dr. Frankenstein was one of those games and we love to promote his work when we can.

The game itself is a worker placement game and engine-building game. You're trying to construct your monster and gain points through various other actions before the angry mob comes to get you! Certain actions make the town angry, which causes them to come for you. Players have control over the length of each round as they can avoid making the town angry or even intentionally outrage the citizens when they think they're in an advantageous position. There's even one placement spot that lets you reduce or increase the town anger outright. How the game plays also is influenced by the amount of players.

Demise is a great spooky worker placement game and while it can be tricky to track down, I personally think it's worth looking into.