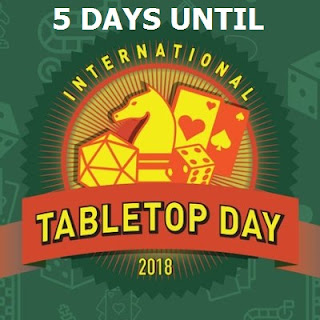 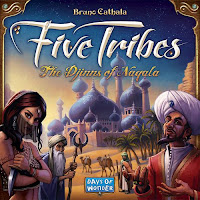 Bruno Cathala is one of the hobby's most brilliant designers. He is one of three designers who get their own shelf in our collection, with our current count of his works at 12. Six of his designs are in my husband's current Top 100 Games of All Time. His games are just works of art.

Five Tribes is no exception. While not my personal favorite from his catalog of work, Five Tribes nevertheless is an amazingly fun, thinky, tactical game.  The game consists of a grid of tiles peppered with a metric ton of little meeples in five different colors.  On your turn you pick up all the meeples from a tile and travel to another tile, dropping off meeples one a time along the way so that the last meeple you drop off lands on a space with members of his own tribe. You claim all those meeples for points and you then trigger different special actions and abilities based on their color. Each tile you stop on has its own potential bonus effect as well and when you clear a tile out on your turn, you gain control over it, earning more victory points.

There's more going on in the game. Collecting goods from the market, summoning powerful Djinns, building palaces and discovering oases. But the real bread and butter of the game is the Mancala-esque meeple collection and dropping off.

Five Tribes is a remarkably rich game, enhanced by its expansions (though certainly not requiring them) and one of the best games of 2014 despite that year being filled with outstanding games.