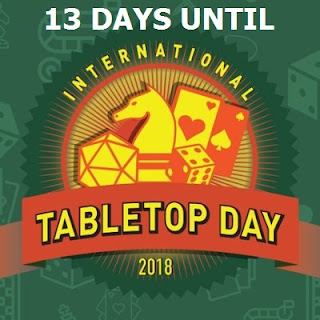 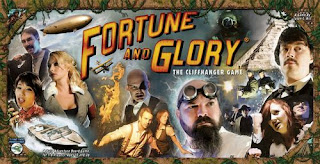 If that line doesn't immediately come to mind when you hear this title, then you were robbed of an amazing childhood! I can't say that, like so many others, didn't love the adventure of Indiana Jones. Even I wanted to adventure around the world looking for artifacts and defeating the bad guys, but like so many, that dream never came to fruition. But with Fortune & Glory I can play like I am living my dream (sort of).

The game itself was interesting to me, because of the artwork. I was intrigued by the use of these real-life images. It made the game feel slightly real, because who doesn't want to be Indiana Jones, even if it is just in a game? The other intriguing part about this game, which surprised me when I first sat down to game, was my husband asking if I wanted to play competitively OR cooperatively! WHAT?!?! I can play against you AND the game or the two of us can play against the game? Oh my! I, though, love cooperative, especially if it's the first time we play.

While time consuming, for me at least, I don't get to break it out often, but it stares at me every day of my life, since it sits on the shelf right next to my work space... taunting me... calling to me... just like it's doing right now! Willpower... so much willpower.

Yet, one of the things I love about this episode is not so much just the basic "woah, what is this game!", but the fact that this episode show the pitfalls of what many of us go through with games. We read the rules, we have someone run the game with us and we are so sold on playing it correctly and we show more people that's how it's played and so on and then, months later, we find out we're wrong about some major flaws. Awe geez. My nephew, in his condescending always arrogant way, could call all those games "false wins" and then be a jerk about it, assuming your misunderstandings were you just cheating to get ahead. Have I mentioned I hate that as well?

So really, if you're going to screw up, at least you played the game consistently with that screw up and you had fun, which really is the point of playing if I'm being completely honest. I screw up stuff all the time, but it's for fun. I'm not in a competition for money and if I'm getting something enjoyable out of the game, isn't that a win for everyone?

Besides... after running a unit on game design and part of the unit being reading rules books and figuring out the game on your own... I already know that direction booklets are the devil and developers really need to spend more time writing directions that can be understood by everyone. Sadly, we all see the world in different ways and that's what playtesting is for, but just trust me... we all have made this mistake and if following rules to the letter is what you find pleasure in, great for you, but for some of us... it's more than the rules.