Sylvie Barc (Part of a Team and with spouse)

Elixir was one of the first games in our collection and it was an unquestionably cute game. You collected ingredients in order to cast spells from your hand-- many of which had effects on your opponents that made them do silly things like sing or hop around. Spellcrafting and spellcasting games are something my husband is very fond of and several more modern games are in our collection (Wizard's Brew, Big Book of Madness, Grimoire), but Elixir was the first of these we owned.

Sylvie Barc was a member of the French design team behind Elixir and her portfolio of games dates back to the 1980s and is somewhat prolific. Many of the games of her and her collaborators never made it across the ocean to the US, but Elixir did.

It's a bit of an odd duck, Elixir. It combines auctions, set collection, and hand clearing with goofy and whimsical party game antics and for the early days of the designer board game wave that hit America it was just quirky enough to stand out. While it may not have stood the test of time, per se-- combining mechanics that usually appeal to two very different gamer demographics-- it was a novel experiment and could produce good laughs with the right group. 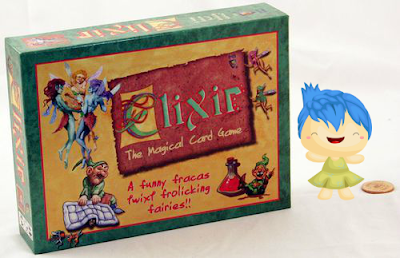