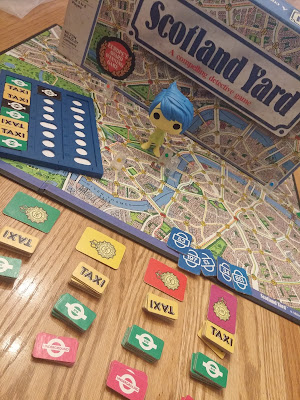 I adore sleuthing games and Scotland Yard has stood the test of time, even inspiring some great games today. Letters from Whitechapel was one of the first ten board games my husband and I ever bought together and we adore it and it owes its existence to this wonderfully ahead-of-its-time game. What I liked about this original was that when you're moving the police officers, it's not just one movement around the board. You can use a taxi, a bus, or the underground to help you catch the offender. There are so many options, but it takesa bit more strategizing to triangulate yourself in a position to cover your bases and create a dragnet. If you enjoy deduction and going up against secret movement of characters, this game pushes all those buttons and has both a cooperative and competitive flavor with its 1 vs. many design.

Scotland Yard won the Spiel de Jahres in the 5th year of that award's existence. According to Chris Wray (a BoardGameGeek contributor), "Every game on the jury’s shortlist that year was by a German designer, and Scotland Yard’s designers were the first all-German team to win the award. Dorothy Garrels was the first female designer to win." Wray's article is full of incredibly interesting historical information on the game and I recommend giving it a read. It even talks more about the actual game design and how the game was inspired by cops and robbers as a theme.

Overall, a game full of firsts and has stood the test of time. The joy is definitely with this one.