Elf on the Shelf Hide-and-Seek - December 1 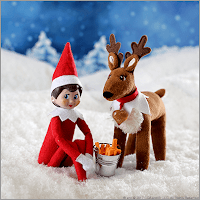 I know how jaded people are about the Elf on the Shelf, but we never took it in a weird direction. See... we really liked the hide-and-seek quality that the EotS presented and then, of course, the added magic of Santa. Even at the age of 9, my daughter is still enamored with Santa. She has very sound logic:

I know that Santa is real, because there is no way you guys are going out at midnight and spending all your money to buy THAT much stuff just to fool me. I don't care what other people say.

Cue all the feels. Add to that her absolute excitement about the Elf on the Shelf returning. Someone asked us why we don't tell her, because it will be hard when the truth comes out... and really? We want her to keep that for however long she wants. And when she finds out, we'll talk about it. Keep the magic going.

So we don't make threats of being watched, but our daughter is always excited when Elfie (yes... the creative name my daughter gave her) goes back to the North Pole each night to check in on Santa and make sure he's alright and doesn't need additional help. She also thinks Elfie shares some of the great things she sees and shares the little gifts my daughter sometimes leaves for her.

This year, we also encouraged her to purge her toys and put them in a box so that Elfie can take them back to Santa. We told her he needed some extra help this year and that Elfie could help with that, since she returns to the North Pole every night. My daughter, while mass-cleaning her room for the holidays, started taking out tons of toys for Elfie. She, though, put in a few broken toys and said that Santa's elves could fix them and make them brand new for other kids! .... more feels? Yes indeed.

In the spirit of last year I again decided, instead of contributing to all the weird pictures out there, to take our hide and seek pictures and post them.

My daughter made something for Elfie when she arrived last year. It was a felt reindeer "stuffed animal." This year she arrived and met up with all her reindeer friends at the new stable my daughter created.  Elfie, though, replaced the lettuce my daughter had been putting in the feedbox with chocolate covered oreos and oreo cereal.  I have to say my daughter was thrilled. 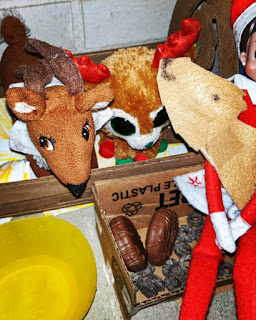 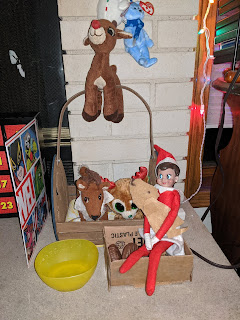