Today was the first day that we ran the summer club. Mondays are for the 5-9 age range. I always tell people, it's not like we're checking IDs or anything. So if you're 10 and you come to the 5-9, I don't care. Or if you're 4 and you sneak in, because you're parents feel you're gamer ready, I'm seriously not going to bat an eyelash. I just want to expose young people to the gaming habit.

I'll just save you the stress of wondering how it went and tell you only two kids showed up. I thought for sure there'd at least be 3 or 4. I also understand that some people might be busy this week or have things going on. I am reserving judgement until at least the end of June. Suffice to say, I was slightly disappointed, but it's my first time doing this. What in the world did I expect? For people to be banging down the door?

The two kids we had though seemed to have fun. My daughter had to leave at 12:15, though, to go to acting, so then the brother and sister were left to each other. When I arrived back, my husband was playing with the 5yo sister and the mom was playing chess with the 9yo brother.

The mom bought the punch card and achievement pin track, so that was really exciting! The daughter played 5 games! She earned her first achievement pin. Sadly, the brother was upset that he did not get to 4 games to earn his first pin, but that's alright. Sometimes it takes time to earn the achievement pins. And to be fair, he played chess. That takes a while.

Despite to disappointing turnout, we did get in some pretty neat games. Here is Day 1's roundup. 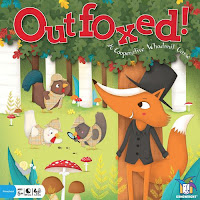 We weren't sure how to start things, so my daughter brought over a game she feels confident teaching and shared it with the kids. 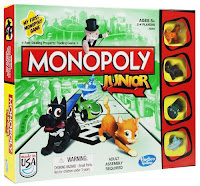 Brought by the brother and sister and they played this next. 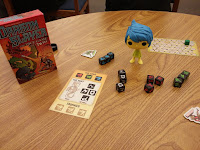 I recommended this while I was dropping off my daughter at acting. Who doesn't like rolling dice and it is a pretty simple game to understand. Much loved by many young people I share it with. 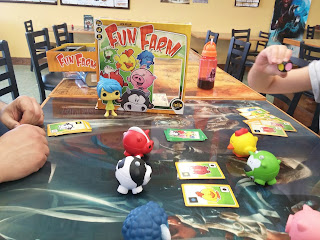 I arrived back to see my husband playing this with the 5yo girl and she was having a ball.

When I arrived back, I saw the mom playing with her 9yo son. 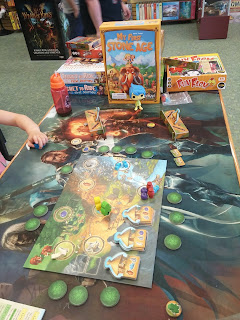 The 5yo girl REALLY wanted to play this and I was pretty familiar with it from my club and our time at Khaos Kon, so we broke it out. She played fine, but we could tell she was flagging.

I challenged my husband while we were waiting for the kids to finish. It was right up to the last tile and my husband won by one tile. Grrr.


Sidenote: I have my gamer rules set and I'll post them on Wednesday when I do my write-up. We already know that Wednesday is looking more promising, because the majority of the contact I've had with parents have been asking about the older kids game day. Excitement is on the horizon!