This particular Daddy-Daughter Tuesday turned into a Daddy-Daughter Thursday due to things going on this week. Now that it's summer, we're starting to see a bit more game play from the whole family. We're getting going.

The game they played was La Isla and it's one my daughter really loves playing. Here's their take on it. 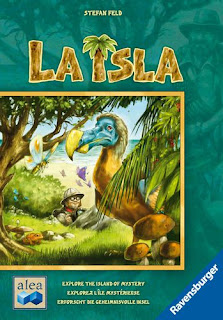 Stefan Feld is known for his "point salad" euro games of medium to heavy complexity.  La Isla, however, is a perfect game for a mid-level child gamer.  They have fun collecting these cute animal tokens. The four phases of each turn are pretty easy to grasp and the method of claiming the tokens is fairly simple visually as well (you just have to surround a token with your people).  The only tough part for a kid Isabelle's age is the heavy iconography-- particularly for the "A Phase" special abilities, but even I need the reference card for those sometimes.  It's really a light, wonderful game that has a lot going on but doesn't overwhelm-- and the design is remarkably clever and interesting.  I honestly was surprised how quickly she took to the game-- to the point where she can teach it herself.  Last night's game was also the first time she ever beat me (by 2 points!) and, even though I still give her some strategic advice from time to time, she definitely is improving as she plays.

What did you like about the game?
I like that is has cool different animals and you get to collect them. My favorite animal was the Fassa (the cat), because it's a kitty and I like kitties, but I also like the Dodo, because they're really silly in my Dinosaur Sim game and make (insert noises).

Is it hard or easy to play?
La Isla is hard (we used the term difficult when talking), because it's hard to know where to put all your people. The easy things are the animal collection.

Do you need help from daddy to play the game?
I think I could teach it, I just might need a little daddy help. I needed, kinda medium, help, kinda didn't when we first learned it. Daddy read the directions to me and I could do a couple things without help, like placing some people to catch animals.

Is there anything about the game that you don't like?
I don't like that I only have certain choices for animals to raise and blocks and powers and that daddy keeps stealing my spots and animals.

If someone asked you if they should buy this game what would you say? Why?
I'd say "yeah!" 'Cause (the adults) can put the board together, um, and the animals are cute (giggles).

Will you play it again?
I will play it again, because I like animals. I've played this game, I think, like, 3 times, maybe 4.

(Sorry... husband forgot to take a picture with her. We're trying to correct this problem slowly but surely.)