My daughter bought this game for my husband for his birthday so that they could play together. At least, that's the story I'm sticking with. It had nothing to do with me getting it for myself. Either way, they finally got a chance to play together.... without me... 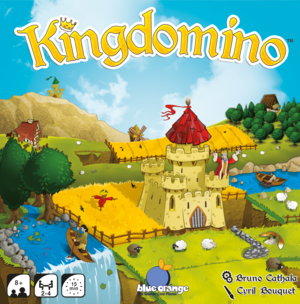 Kingdomino is a very fast, simple game. It's not incredibly deep, but it's certainly enough to keep kids engaged and works nicely for families. It offers up simple choices but still allows for some measure of strategy. Isabelle understood the premise and the scoring easily enough, though the 5x5 spatial element was tricky for her. She would exceed her 5 square limit multiple times because even though one row was only 4 squares, the one above it would extend out another two squares. That confused her.  Other than that, a very good option for that age range.

What did you like about the game?I like that we get to build a kingdom and I get to choose green and build a forest kingdom.

The art had some weird stuff in the pictures. Like a crazy thing walking in giant-sized boots. CRAAAAAZZZZZEEEEEEEY!

Is it hard or easy to play?It was easy to play, 'cause really all you do is put pieces together. And placing people down on the rectangles and that's the tile we put down in our kingdom and there's only six in a row for tiles and you count every single square.
Do you need help from daddy to play the game?The first time we played, because I put more than six tiles, but you're not supposed to move tiles, but he let me move the tiles, because I mixed them up. I don't think I'd need help to play the game again.
Is there anything about the game that you don't like?I don't like that I lost both times. There weren't many crowns and it's really hard to get six squares (not sure what she was getting at). The crowns are your points and I just wasn't getting enough crowns. They're random and we place our meeples on them. You hope you can place for the crown.
Do you think other kids would like the game? Why?Yes, because it's fun to build a kingdom. The meeples are fun to play with. The strategy is building which people like.
If someone asked you if they should buy this game what would you say? Why?Yes, because the meeples are cool and you can put the meeples in the palace and it's building and people like building.
Will you play it again?I would like to play this game again. 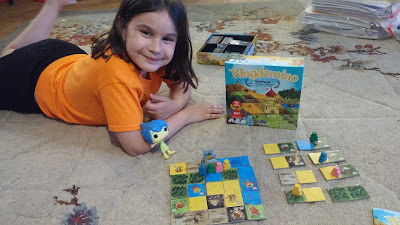