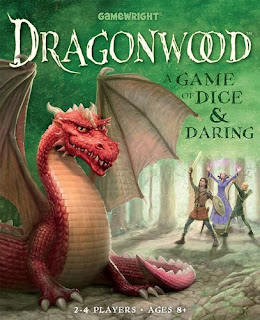 Dragonwood is fundamentally a very simple game. What makes it stand out a bit from other dice games that utilize the press-your-luck mechanic is an element of player agency many of them do not offer. The player decides when they have enough cards in their set (matching color, number, or a straight run of cards) to make an attempt at capturing a beast and how many dice they will get to use for that attempt. Additionally, the special power cards offer a mild element of engine building, but as they do not provide any end game points, there is a definite weighing of risk vs. reward in going after them. As for the game itself in a family/child context, it seems like a solid addition to a collection catering to those targets. It's not revolutionary, but its easy to grasp, pretty fun, and of very nice production value typical of games published by Gamewright.

What did you like about the game?
I liked that there were animals and I caught a jaguar, jaguar, and fire ants. I almost caught the water dragon (the blue one). I like that you can scream to catch something. Like, how do you scream and catch something? That just doesn't make sense to me.

I like rolling dice, but it was hard to get six dice to get the dragons.

Is it hard or easy to play?
It was hard to choose the cards for the actions. But it was easy to play.

Do you need help from daddy to play the game?
Daddy (Mommy) had to teach me. Then I only needed a little help. It was easy.

Is there anything about the game that you don't like?
There were just too many cards in my hands and I kept forgetting about the 9 cards only. I wanted to have the most cards so I could get the animals I wanted. I didn't know what to do with all the cards. I wanted cards but my hands are small. I had to make piles and I felt I always had to scream and could never stomp. (Don't know how we missed it, but we forgot about the 9 card max hand, but we know now!)

Do you think other kids would like the game? Why?
Yes, because I would tell them that there are cards and animals on them and they're cute and you get to roll dice and there's even two dragons! The cards have numbers and the colored pictures are cool (green and blue were the best).

Will you play it again?
Yes, because I get to play it with my family and it's a fun game. 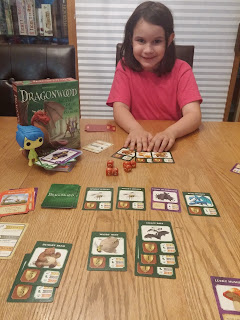