Sometimes you just need to be overly silly and that is exactly what I did.

It's been a week with some, just. . . weird stuff. I've been up and down and left and right and adjusting to any number of things.

So today my husband helped me get out of the house to run a few errands and we ended up having fun. Our definition of fun varies, but I had FUN!

I'll spare you the details of silliness at the bank and Target, but we chose Taco Bell as of lunch location. I don't care what you say about Taco Bell, we always enjoy having a small meal there and the service at OUR Taco Bell is always amazing!

I have been joking about taking the Triple Dare Challenge with the Dare Devil Loaded Grillers. I mean, really just joking, but today. . . I went for it. I ordered one of each and intended to have a little tasting.  Here are the results. 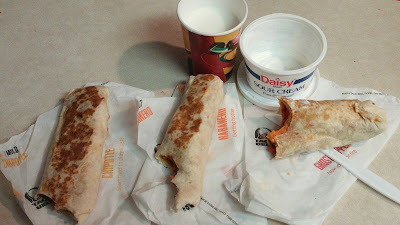 The cup of milk was to cleanse between each tasting so that flavors and heat didn't mingle.

Mild Chipotle - There is next to no heat on this one. Very mild. A standard Loaded Griller flavor. Actually considered asking my daughter if she wanted a bite or two. She's 5yos and likes nothing but cheese, meat, and sour cream on her tacos.

Hot Habanero - This one has a little bit of kick, but nothing major to report home about. The flavor is slightly fruity or flowery. The Habanero has that type of flavor, though. The perfect combination and rather enjoyable. The most enjoyable, on its own, of the three.

Fiery Ghost Pepper - Clearly the most heat, but it doesn't just hit you and obliterate your taste-buds. Instead, it has a tangy taste upon first bite. Then the heat slowly settles in. Sneaks up on you like a ghost (.... ghost pepper.... ok... it had to be done). The heat is a bit intense after a few bites, though, and I found adding a little sour cream made the whole griller come together. Quite flavorful and enjoyable! Would order again!

And there you have it. I took the dare and had an enjoyable lunch. To be honest, I only ate the Habanero and Ghost Pepper grillers after tasting. The Chipotle one was saved for later, because else it's just too much food. A fun little adventure for the afternoon.