When I was a child, my dad would write Rabbit Riddles for us to find our baskets. We'd each have four riddles, aside from an initial basket in our room. I'd love to say that my mom didn't fill the baskets to the brim, but she did. I loved the tradition, though, of following the clues. My parent's house was pretty big, so there were tons of nooks and crannies to hide baskets in.

Last year, we tried the riddles with our daughter, but they weren't very successful. This year, though, I wrote the riddles and orchestrated everything and I woke up to a very busy little midgiekins! She was reading the clues and loudly talking through them to figure out where the baskets were.

I can proudly say, our baskets were not filled to the brim. There was an item of clothing in each, 2 Nintendo 3DS used games we got for a few bucks, two tabletop games, and a few small treats.

Riddle one we tapped across her doorway, so she could not leave without running into it. We weren't sure where to put the first clue where she would see it and head down the right path. Then, after finding the first basket, she got her next clue. This is the sign we hung in her doorway. 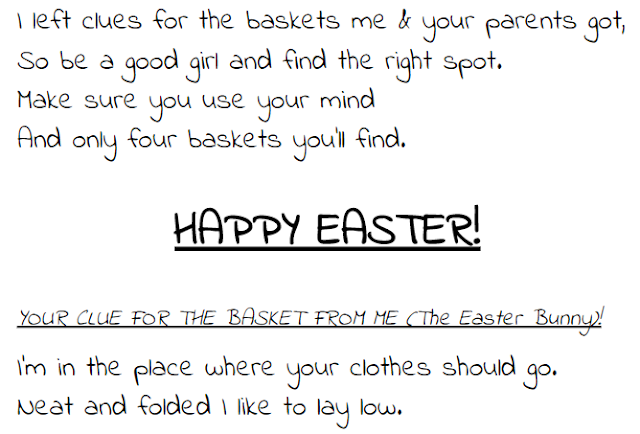 Yeah, yeah. They are kinda silly and reading them today, I would have totally wordsmithed better clues, but who cares. Like, I totally could have said "Only four basket you'll find, If you choose to use your mind." Meh... now I know what my dad said when he said these were frustrating sometimes. But on her basket from the Bunny was the next clue!

The next basket was on the front porch. I figured it we weren't awake yet with the first basket, that opening the doors would cause the dogs to bark and we'd get up. I luckily sensed her basket searching and woke up after she had brought the initial basket downstairs and was going on and on and on about it to my husband who was sleeping on the couch. She was so excited about the clues and puzzling them out. I felt so proud. As with the first basket, she found a clue to the next one.

She had to look in her daddy's office where he has shelves of blue games. 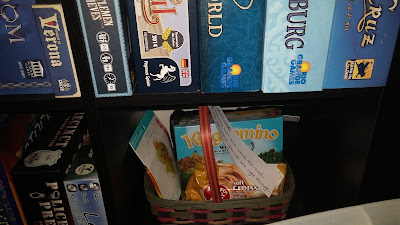 She was so funny about saying that the actual shelves weren't blue. I explained the Bunny was giving you a clue, not a direct location. She did that a few times with the clues, wanting to know why the Bunny just didn't tell her where. I had to explain the riddles and clues to her and she considered it. Ha! Then she dove into the final clue.

The final clue was for something we didn't have enough baskets for and we weren't dropping money on baskets, since the majority of them are at my mom's house. So I used a clear Winnie-the-Pooh cookie jar. I was really nerdy into Winnie-the-Pooh through my college years, but my daughter does not share the same interest, so all my Pooh stuff is trivialized by her. Either way, I put the cookie jar in our bookcase where I have my statues of Winnie-the-Pooh with our MST3K movies and many books and other trinkets. She found it by looking through windows and got to the bookcase realizing those were windows, too. 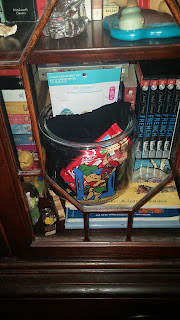 She then thought the Easter Bunny worked on some sort of list like Santa Clause and I was like, uh, no. He probably gave you the Sonic the Hedgehog game, because he's super into hedgehogs and thought you'd like it. Thank goodness that logic stuck. The Bunny also got her a Minecraft shirt, which I knew she'd love and was already on her when I came downstairs this morning. 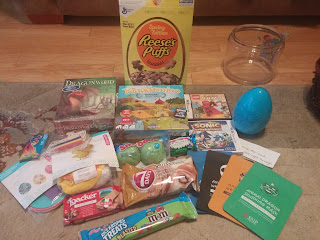 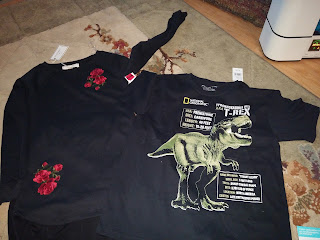 The two games that we got her were Dragonwood: A Game of Dice and Daring and Kingdomino. I got her Dragonwood, because she likes dice rolling games and it has the cards to add to the adventure. I thought it'd be pretty cool for her. It is also a 2015 Mensa Select Winner, so I thought, "Right! My daughter is so Mensa!" hahaha!

I shouldn't have to explain Kingdomino... Bruno Cathala! Done. Moving on.

Ok, not really moving on. I wouldn't have doubted Kingdomino having awards and it has two: 2017 Spiel des Jahres Winner and 2017 Gouden Ludo Best Family Game Winner. It was also nominee for a few others. Kingdomino was brought to my school during Friday Night Frenzy and to a Math night we did at another elementary. The kids seemed to really like it. So I took the chance and got it for my home. Really excited about it.

I'm just so glad it was still fun for her this year. Since I don't really have much family left for celebrating holidays, many holidays lose their flavor in my home. I keep reminding my husband that we have a daughter to consider who is missing out on these wonderful experiences we had as kids. So this year, because I start work the next day (usually Spring Break has Easter at the beginning, not the end) and I need the day before to mentally prepare myself, we didn't travel the two hours to see family. We didn't dye eggs or look for eggs in the yard. Last year was pretty awesome for that (I had two mini-Lego sets split into two sets of colored Eggs and she had to find all the pieces and then put the Lego together! That was cool.), but this year we just didn't want to. Plus it's cold and it snowed. 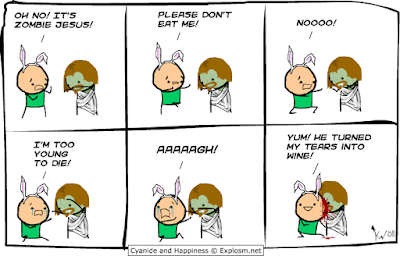