The Joy of Gaming: 15 Days Until International Tabletop Day - Takenoko 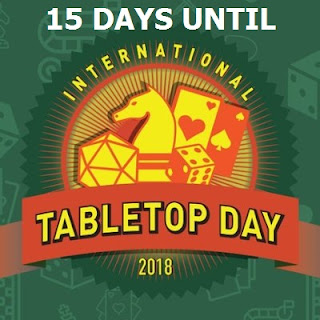 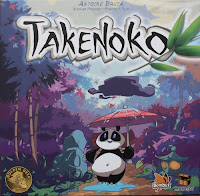 Takenoko is the game that keeps on giving. Not only do we own the game, but the game is in my club vault AND we use it every year for my Tabletop Game Unit. The draw of it really centers around the panda. I've come to the conclusion that the panda somehow makes the players feel less stressed. But this game is not only near and dear to my heart, because the mechanics are something I love and I actually consider myself good at the game, but because I have so many funny stories that go along with the game play.

Several years ago we were starting to introduce my daughter to board games. Now, she was too young to play things like Ticket to Ride and Takenoko, but sometimes it's not about her playing the games, it's about exposing her to games that have "neat" concepts. Takenoko had pandas and she loves animals, so we broke it out to play. The mechanics were a bit outside of what she could handle at age 3, but she gave her the honorable task of being "The Weather Panda." She had a panda hat and wore that and we let her roll the weather die. If lightening struck, she would move the panda and make all the "nom nom nom" voices to go with it. I actually wrote a little thing about playing these older games with her so young if you want to know more about our early gaming with my daughter.

Another story, though, involves my game club and, actually, some of my kids this year in my Literacy class. My club has a rule: "You break it, you by me a new one." My club really has no funding. The easiest moneymakers were stopped due to healthy food laws that were passed, so it's down to things like selling cups or working at Culvers to get 15% of their profits. Well, when you have a small club of inconsistent and noncommittal kids, it makes that kind of stuff a bit difficult. So I purchase most of the games and we have a few donations here and there from friends or families of the students.

Takenoko was the first causality of the club. The kids would play it so much that the poor gardeners head finally came off. So our club copy has a headless gardener. When I brought the game out year for our Tabletop Game Unit, the group who played the game came up with a story about the headless gardener. It goes something like this:


The panda and the gardener never really got along. So one day, when the lightening and storms scared the panda, he ran and being the nervous eater that he is, he grabbed the nearest bamboo-looking item, not realizing it was the gardener's hat. With one bite, the panda ate the head of the gardener. Now the headless gardener roams the Emperor's garden fulling his tasks, forever haunting the panda that killed him.

Morbid, I know, but what a story!

The memories with this game are wonderful and it is a game I love to break for new gamers all the time. Plus... PANDAS! Plus Antoine Bauza (we're superfans!).