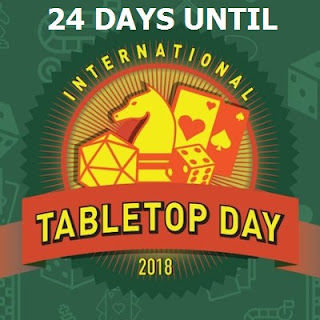 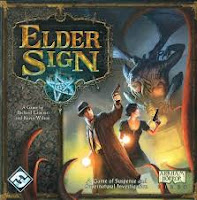 In Elder Sign, players a group of investigators who are really into the occult and who are investigating a museum. Our goal is to collect elder signs in order to stop these evil mythic deities from breaking through the gate and destroying the world! I adore playing a detective and I live for cooperative games! Variable player powers is also my thing and I am amazing at rolling dice! (I can't even demo how to play Dragon Slayer without having to always change my dice, because I blow through destroying the dragons. It didn't always used to be that way, but I have become a dice rolling queen!)

After seeing it on Tabletop, we knew this game was for us (especially since Felicia Day played it, because.... Felicia Day). This game hit the table quite a bit during game nights with our friend Jim. We also ended up playing Hastur quite a bit, which is the same elder god they have in their game. I loved playing this game quite a bit and it was always engaging. As I've said, I love cooperative games and this one offered many opportunities for discussing. A drawback is that if you have a dominate player, they'll love just taking everyone's turns for them. I, though, haven't had those people around when I've played this, so it's been a win-win all around!

What I love about Tabletop is that it "teaches" the game the way I like to learn games, which is through playing a game. I need the general rules offered to me upfront, but I still learn through playing. So when we learned this game, it was helpful to see a fun play-through with information when it happened in the game and not just one person running through the game. It might seem silly to some more hardcore gamers, but this was so much easier to understand and I love Tabletop all the more for it. Hurray!