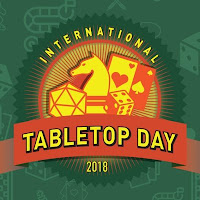 This was my first year back in gaming. As I've mentioned in previous posts, I had taken a huge break and was focusing obsessively on three RPG systems with my husband and our friend. Having stepped back into the fold, I was so excited to share in Tabletop Day again. From looking at my blog over the last month, it should be rather obvious that I have been so excited for this year. I planned and dedicated a whole month to counting down to it! Even moreso, when I was booking days for my Tabletop Game Club to have their Lock-Ins I chose the eve of Tabletop Day so we could ring in the excitement at midnight! That was all planned way back in January!

As the day drew closer, I was starting to have severe pain in my stomach. I was doubled over in pain at work. I even went home on one of the days. Then I didn't have pain and then I had pain again and it was so inconsistent. So on the Friday of our Lock-In, I was feeling great! My day went well and everything was great and I was so excited and putting up my posters for Tabletop Day and I had all my table toppers and stickers for the kids!

The gaming day started off with our 6th Grade incentive. I was hosting a gaming room. I promoted my gaming room with a showing of some of the offerings from our vault and my own personal collection that were being used for my tabletop game creation unit in Literacy.

When school ended, it was time for our Tabletop Day celebration! As with all our Lock-Ins, we start with dinner and roll into gaming. I took a little longer to get my dinner eaten, because a co-worker stopped in and I was showing off a game I was excited about and he just, in general, got a feel for what we were doing.  I was all excited by my toppers and posters, so I HAD to show those off. 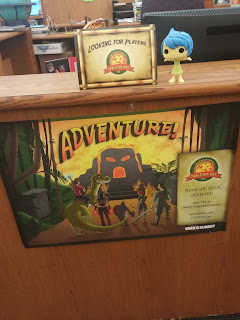 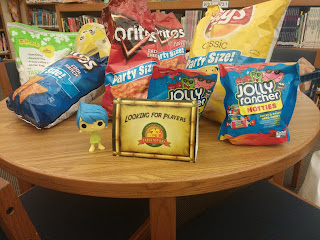 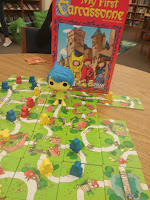 After he stole from our snack table, which clearly states "looking for players", he left and I finally sat down to eat. Once I was done, I joined in on a game of Carcassonne Junior and while I played, I felt like a sudden fever had come over me and I was starting to bend over in pain. When the game finished (one of the girls "let me" win), I left the media center and went to the bathroom. It wasn't helping, but the pain was intense. I went to the more luxurious staff bathroom and I literally spent two hours on the floor wondering all sorts of things about my digestive tract. I decided to maybe set up my bed in the back room in the media center where the girls sleep. I'd lay down for a bit and the pain would go away... all I had to do was push through it.

Half an hour later, it was not better. I was in tears and doubled over in pain and I told my husband to cancel the lock-in. Parents were called and kids were sent home at 9PM. I felt so guilty and so horrible. My husband cleaned up a little, but I told the night custodian we'd be back in the morning to clean up everything.

My husband closed up and took me home where I went straight to bed in pain. I had ruined the night. I had ruined my student's weekend. But by the next morning I was feel fine. So we went to pick up my daughter from my friend's house. We decided to go out to eat and took my daughter to IHOP, because she's been begging. I ordered just an omelet, then we stopped back home and went back out to collect our ceramics that we made at a local shop and I wanted to drop off our tabletop summer camp fliers at the local game shop so they could start to promote it. When we left the ceramics shop, I was starting to have pain in my stomach and it got worse after my daughter accidentally tripped me and I slammed straight into the ground. By the time we made it to the game shop, which was literally only 5 minutes away, I was doubled over in pain crying. I was driving and my husband forced me to pull over and he drove me home.

I still didn't know what to do and I went to lay down. My husband brought me some soda to drink and I finally was able to empty my stomach. Bottom line... I'm feeling miserable, but I have no fever so I can't even put my finger on what was wrong.

So I ruined everyone's Tabletop Day, because I could barely do anything and I had canceled the kids' lock-in. I was determined to do something to make my husband feel better, because he was literally devastated. I had him bring up a folding table and he laid it on the bed. While he ran to the store, I quickly ran downstairs for a couple light games and made up the table. So when he came home and came up to check on me, he would see my surprise. 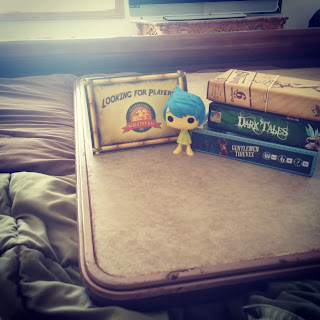 I did the trick and we were able to play a few games. 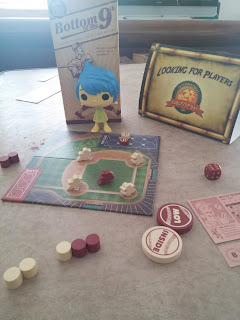 The weekend went along the same lines... lots of pain... can't eat. I finally could have some yogurt. I hope I can find out what this is soon and get back to my normal life and enjoy all of the gaming excitement that's been going on around me.

*EDIT*On that Monday I finally went to urgent care and it turned out I had an ulcer. How exciting! So now that I know, let's hope things can get better and the next lock-in will be better.

On a sadder note, I did not get to finish my countdown to Tabletop Day due to this health dilemma, but all this happening really showed me that I was putting myself under way to much pressure with everything I was doing and I'm looking forward to hopefully finding a bit more zen.