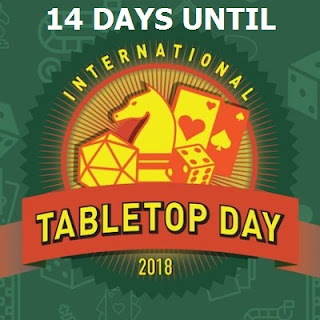 I learned about Unspeakable Words from watching Tabletop. I immediately fell in love and bought the game. The scrabble style quality of points via word construction, but also the opportunity to fall victim to the insanity of Cthulu was too much of a draw for me. The little figures were so cute! The art on the cards was unique. And I'm a Literacy teacher! 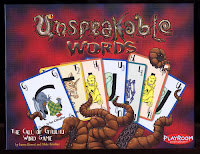 Being silly is one of my things. It's even my teaching style, because I have learned over the years that students retain more information if you can give them something silly to latch on to than if you just straight-up teach them. It also stops class clowns from derailing teaching by making absurd comments that then derail the concepts you're teaching and enter false information into your lesson, because it was a joke. "In 1492, Columbus sailed the ocean blue, but the whole ship smelled like poo and everyone died of the flu." NOOOOO!!!!!!

This is a game that offers a bit of silliness, but as a teacher I saw the potential for an informal assessment opportunity. When getting to know kids and see where their comprehension level is at, there are things teachers pay attention to. Testing and papers and writing don't always do the trick. So one day there was a field trip for music and it left behind 2 kids in my class. I didn't really know what to do with these two kids, so I decided to break out some games and the three of us play. Unspeakable Words was one of the games, because I wanted to test my theory that this game can informally assess spelling and the accessing of larger than average words (so not just cat, hat, mat kinda stuff). And oh my goodness... it did the trick. It literally helped me to see where my one student was in a way that wasn't test taking or doing an essay. Immediately I was able to start planning for how to reach him as we progressed through out units.

A grandiose story for such a simple game, but it has stuck with me for a long time. It was also the game that sparked how I could use games within my classroom to help teach concepts, beyond just sitting down and laying out the game and saying "let's play 1775: Rebellion so that we can understand the American Revolution better."

Sadly, I had to take the game out of my vault, because I realized it was out of print and I cherished my copy. So there wouldn't be a "you break it, you buy me a new one." Luckily it is back in print, but I like the looks of my copy better. I still hope to have some extra money somewhere to get a copy to put back into my game vault.

Bonus: One of the designers is Mike Selinker (whose name I swear I will never screw up again by calling him Mark........ nerd shame of the highest order).