The Joy of Gaming: Daddy-Daughter Tuesdays (Mice and Mystics)

If you're a frequent reader of my blog, you've probably heard me talk about Mice & Mystics and how we're playing it with our daughter. Well, this week it wasn't just a daddy-daughter game... it was a mommy-daddy-daughter game. I'm always excited to be a part of things when I can be. With summer vacation quickly approaching, I'm hoping to be able to be party of these games. 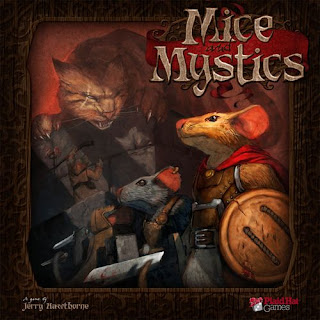 Mice & Mystics is a wonderful dungeon crawl adventure. It features a comparatively light ruleset compared to other games of that sort and that combined with the amazing theme and adorable story makes it a great family game.  On the other hand, it requires much more patience and ability to focus than the average 7 year old has and we tend to need to redirect our daughter to settle down and pay attention during the course of a game. Her excitement is palpable, but it can also hamper a game session.  The game can also be frustrating due to the random nature of some of its elements.  Sometimes an adventure just won't go your way at all.

Still, I've played solo through the entire base game campaign and the Heart of Glorm expansion and I enjoyed it very much, but it wasn't until I started playing it with the family that I felt it really shined.

What do you like about the game?
I like that I get to be Collin and Lily and we all get to work together. I like how it tells a story. I make Lily make cheesecakes, because Lily gets alot of cake. It could be cheese pizza and then if you keep getting cheese, you can stack them and make it bigger and bigger and blahbluhblah.

I like Lily, because she's the Archer and I like Collin because he's a close fighter and he's a prince. I like Collin with First Aid and Lily with aimed and power shot.

Is it hard or easy to play?
Sometimes it's easy, sometimes it's hard. When we work together, it's easier to fight guys, but when we're outnumbered it's harder and when we split up it's hard, too.

I needed help rolling, one time, because I was just dropping the dice instead of rolling them. I sometimes need help choosing my skills and having them explained to me. Like, this'll be good and that'll be good.

Is there anything about the game that you don't like?
Sometimes it takes us a really long time and sometimes we get outnumbered, which I get angry about. I don't like being outnumbered.

Do you think other kids would like the game? Why?
Of course, cause teamwork is always good and its nice to spend time with others in games. There's little figures and we get our own little characters and on the cards it tells their stories. Mommy gives us cheese when we play it. (I don't think I'll be giving all kids cheese when they play it.)

If someone asked you if they should buy this game what would you say? Why?
Of course, again, cause it's suuuuppppeeer fuuuuun. (Gives me a duh look!) The same reasons for everything I already said!

Will you play it again?
YES! And that's cool... you're keyboard glows. I like your keyboard, it can glow. 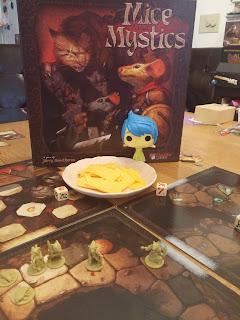