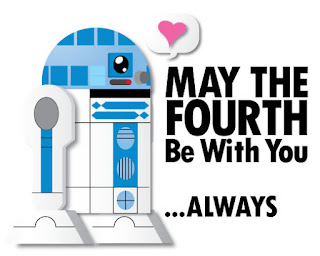 Do you ever just feel like a complete failure?

Star Wars Day (sigh... the May 4th one) has been fast approaching. I feel like everyone was expecting me to do things. Dress up, help with announcements, post fun things.

But for some reason... somehow... I lost interest. I stopped caring. Then I felt guilty, because it was like... it's what's expected. Then what if I pass it up and regret leaving it behind?

The spiral down into whatever this is. I had been battling illnesses over the last two weeks, so I think it was affecting me. Going off and on different meds to try to handle it. I pushed myself, though, to try to make the best of a bad situation.

Some genius scheduled a field trip for May 4th. I was REQUIRED to wear a specific shirt. Well... I have an ewok hooded tank top, so I decided to wear it under the shirt. I put on my lego lightsaber earrings and my R2D2 3D printed earrings. But then I couldn't find my "May the Fourth Be With You" shirt so I wore my Buddah Yoda shirt (for before and after the field trip). At least I had my outfit planned. Also wore one C3PO sock and one R2D2 sock (who said socks need to match! Disrupt your thinking and open it to a new world of possibilities.).

Now for the announcements. I spent my Thursday evening constructing the most epic announcements ever. I had music and wavs and rewrote the announcements to be fun. I did it last year with my coworker and it was amazing! I left feeling amazing! We'd done it the year prior to that and it was okay, but last year we nailed it. I thought this year we'd make it even better, but as time approached my coworker started acting weird. He'd probably say I was acting weird, but I was asking if he wanted to do them.

The drama that transpired from that particular event was not what I needed at that point in time. I made sure to admonition myself later, because I didn't read the signals that he was in one of his monthly funks where he just acts like a jerk, but as men do... it wasn't him, it was me. I thought our relationship had been better since I finally confronted him back in March, but... well... apparently not.

So this year he completely ruined it. Was indifferent... didn't care what I did.... actually criticized what I did... didn't take a moment to quick prep with me or go over anything (even though I know he looked at the googledoc the night before). I really just felt betrayed and disrespected. He has a tendency to do that. Toxic is what this relationship is and I keep just letting them in.

And then I rushed off to the field trip... WHICH WAS AMAZING! I had another Star Wars person with me. We joked. We even saw a Vader laser piece of metal at one of the locations. 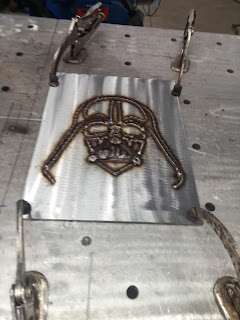 A student also came up to me and gave me a fist pump and said "May the Fourth Be With You" and I said "And also with you" and as we bumped, I pulled away and did the explosion hand and said "Like the Death Star." I thought it was so cool.

But by the time I got back to school I was feeling all funky again. I couldn't perk up and then my final class of the day came in and they made me feel so much better. They even let me go through my announcements the way they were meant to be and they loved it and I felt so much better. Then we worked for the rest of the day on their games.

I tried to regain the day and we went out for dinner at our favorite Mexican place and my daughter had fried ice cream for the first time. I also saw that SHE had worn her Star Wars shirt, too. That made me feel so proud. 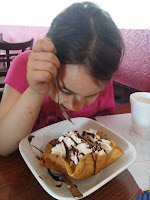 When we got home her and I took our obligatory nerd picture.

But then I was in a funk again... we tried to regroup and put on The Force Awakens and just tried to make a night of it. For me to not be so excited about all of this and have plans and neat things going on and treats and just all sorts of things is not me.

I feel so lost right now. Absolutely invisible to the world. Uncertain about myself. Alone. I've got to get back into the doctor and fix this, because joy is disappearing and my Jedi Mind Tricks to get better are just not tricking my mind enough.

Next year we'll make it through. 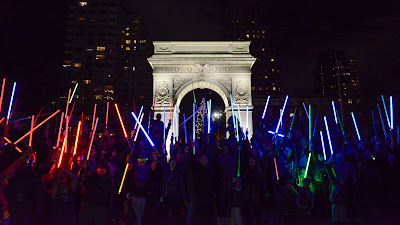