From a Certain Point of View #2: "The Bucket"

"The Bucket" by Christie Golden 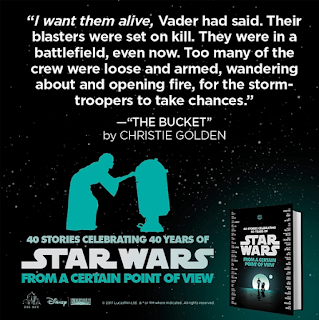 At first glance you might think the story is going to be about a droid, like R2D2 or something like that. It isn't. It is about a StormTrooper fresh out of the Academy who is part of the group invading the Tantive IV, or, more specifically, part of Vader's Fist.

TK-4601 (also known as Tarvyn Lareka) takes us through his youthful admiration of being part of the Empire and, specifically, Vader himself. He is essentially a kid who is beyond starstruck with his own luck being assigned for such a prestigious position: boarding a Rebel ship with Vader himself. Right away the story shows his own shock of being in battle when TK-4601 describes the death of Captain Antilles. It makes you cringe, but feels reminiscent of stories you hear from WWI or WWII when young soldiers first enter battle and little events introduce you to the gruesomeness of war.

As the story goes on, TK-4601 is the one who finds Leia and having engaged with her in a personal way, he realizes that he only feels comfortable fighting the "faceless" enemy. He requests a transfer from escorting her to Vader. The raw reflection of this trooper continues to initiate a meaningful perspective, adding to this memorable scene that, so early, captures all of our attention in the first film.

"The Bucket" is another story that I enjoyed and, as I read, I continued to expect the level of stories that "Raymus" and "The Bucket" had to offer. Like at this point in the movie itself... I was hooked! 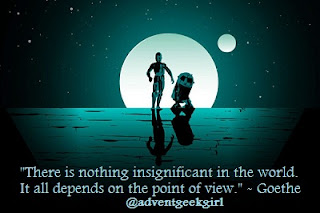