Every Tuesday my husband and daughter play a game together. Sometimes it's the same game, but more often than not it's a new game. I love that they have this special tradition together, so I wanted to be able to share it. I've started asking my husband to take a picture of my daughter with the game and then I'm hoping to have them share something about the game after they play.

My daughter is 7-years-old and has been raised in a gaming home. My husband and her have been doing this for quite a few years now and my daughter even loves teaching these games to other people.

So here is entry #1: Rattlebones!  We'll see how it goes! 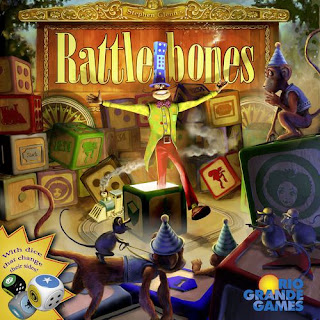 Rattlebones is an incredibly luck-filled game. However, it creates the illusion of being more than that by offering the players interesting choices (which dice to roll, which pawn to move) on their turn.  Combined with the silly theme, easy rules, short playtime and the novelty of the dice-building mechanic I think it's a great game to play with kids and as a family.

After the first couple turns, where I told Isabelle the importance of getting some "re-roll" actions or gold on her main die, I was mostly able to let her play the game on her own and make her own choices. I had to remind her that whichever die she used to move had to be the die that got the new face, but other than that she grasped the rules very easily. Even the iconography created little difficulty in her comprehension of the game. She won fair and square thanks to some frequent rolling of Stars!

What did you like about the game?
Rattlebones is a fun game, because you're playing against each other and there's all types of, like, little things to put in dice. I liked that I was the first one to win. Different tokens did different things and they were really cool.

Was it hard or easy to play?
It was kinda hard, kinda easy. Easy cause I got a bunch of tokens on my dice and I got a ton of stars and as I sold them I moved up a bunch for points. It was hard, because daddy was catching up to you. He was almost on my tail! But I kept moving Rattlebones, Rattlebones made it to me!

Did you need help from daddy to play the game?
Just for turn. He helped me choose my token.

Was there anything about the game that you didn't like?
I don't think I didn't like anything. I pretty much liked the game.

Do you think other kids would like the game? Why?
Yes, because they'd probably like how you get to change the tokens in the dice and, um, the little bunnies that show you your points. You know, little bunnies... hop, hop, hop, hop.

If someone asked you if they should buy this game what would you say? Why?
Of course! It's super fun! 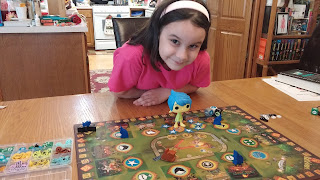