Fluxx has been a game on my table for a very long time. It is one of those games you can break out with pretty much anyone, regardless of their gaming level. "Hardcore" gamers (and I used that term somewhat sarcastically) like to talk down about Fluxx, but we still find it a fun, light game from time to time and when it originally hit the scene it was a very clever design. When I started my Tabletop Game Club at my school, this was one of the games that was played constantly. It is still played to a degree that I sometimes have to take it out of the vault so that other games will be played. I can't tell you how many versions of Fluxx I've bought for my club, but I love how each one has their own flavorful touches that changes the gameplay, albeit only slightly.

Fluxx is a game of ever changing rules, goals, and actions - hence the name.

This game is the first official husband-and-wife team of the game designers. Others might have worked with significant others or relationships formed out of being co-designers, but this husband and wife team not only have a recognizable name, but are well known for their creative endeavors at Looney Labs. 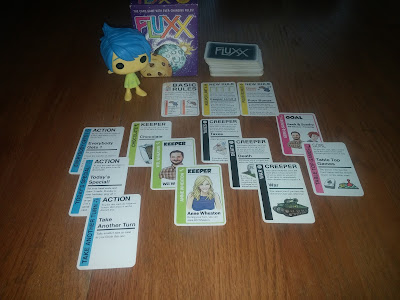