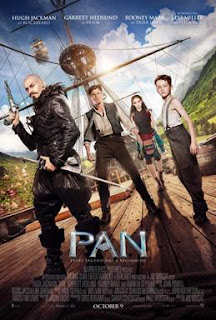 I am an avid and supreme geek of Peter Pan and J.M. Barrie. I wrote a published, lengthy essay on history and I, at the time, had one of the largest amassed collection of academic publications, cultural compendium of references, and research on Barrie. This was, of course, prior to the invention of Wikipedia and when people still needed to research mostly in libraries and use books to gather information. So to say I am simply a fan is unjust.

The culture of Peter Pan is so interesting and speaks volumes to our modern society. I've not been overly dedicated to strict adaptations of the story. I think Peter Pan can be applied to numerous story types and can be changed to fit numerous situations, but sometimes a movie comes along that misses the pirate boat completely.

My faith in the new Pan (2015) movie was pretty strong. I thought it had its origins in the Peter and the Starcatchers book series, but upon further review, it was not founded in those novels. Even though it does tap into this idea of Blackbeard, who came before Captain Hook.

Instead, the film touts itself to be a prequel to Barrie's Peter Pan. Instead of treating itself like a reimagining of the series, it really put stock in treating all of us to the origin of Peter Pan, which is does not! It recreates the world and the mythos ENTIRELY! To act as if it taps into the origin of the original Peter Pan is wrong on so many counts. Within this is where the fatal flaw of Pan can be found.

The visual qualities and artistic creation of the film are absolutely stellar and beautiful. The acting of Levi Miller (Peter Pan) is really well done. He carries the whole film and does, honestly, embody the essence of Peter, but there are some other issues. So let's get to the problems.

1. Set during World War II
Therein lies the immediate problem with treating this like a direct prequel to Barrie's story. Barrie's story was first debuted on the stage in 1904. If Peter was in fact 13 at the time of the story, there's no plausible way for him to be living during WWII. Even Hook accounted for the difference in that you don't age in Neverland and Peter chose to come back to London decades later. Instead, you have Peter stolen from London during WWII. Barrie didn't even live to see WWII, dying in 1937.

2. Soundtrack
Please. . . I beg you. . . stop using Nirvana in your Romantic and Victorian movies. It worked in Moulin Rouge (2002), because that's what the film was based around, but even there it was only a minor usage. Nirvana an Kurt Cobain were either romantics nor Victorians and the song is so immensely out of place, it is ludicrous. not to mention the use of the Ramones! Either commit entirely and make the film a musical or be creative enough to develop your own music and pirate songs! That was very off-putting as a whole. And then, well. . . the orchestral soundtrack was hardly inspired. . . cribbing from Powell's previous wrote on How to Train Your Dragon and even grifting a little from familiar pirate soundtracks, like Pirates of the Caribbean.

3. Faith and Trust and Pixie Dust
What is this mining for pixie dust? And flying without pixie dust? And all of a sudden Peter doesn't need pixie dust, because he's part pixie? Instead the pixie dust is used to keep Blackbeard young? Yet, no one figured out it helps you the fly? I am so confused by all this pixie dust crap... well... not so much pixie dust as pixie rocks. All you have to do is sprinkle it from a fairy and be done with it.

4. Agelessness
Blackbeard needs to be rejuvenated with pixie dust that is mined out of the island, because Blackbeard has hunted the fairies to extinction. You're not supposed to age on Neverland. There's not some sort of drug-like catch to the whole thing. Neverland and magical, not a crack bed of never aging. NEVERland. Get it?

5. Prophesies
Peter was never a boy who was prophesied about. He was an infant who lived in Kensington Garden. He had run away from home and when he returned, realized his parents had a new baby and probably forgot about him. The Fairies found him in Kensington Garden and kidnapped him to Neverland. He was a young boy then. When Barrie looked for models for the statue by Frampton that stands in Kensington Garden, he based it on the boy from the family he had friended. This boy was 8 at the time. Bottom line. . .there was no prophecy.

Overall
The whole thing is a mess. It's taking from all the different Peter Pan stories and trying too hard to make it's own version of the story, but it falls short in so many areas. A great deal of it has to do with the story falling so far away from the original that all it uses are some characters and settings that are familiar. The rest is just so confusing and makes the movie difficult to invest in. It almost felt like the message of the movie was lost as well. Peter Pan is about a boy who never wants to grow up. He fears being like all the adults in the world. He wants to stay young. Instead, this is about a boy who needs to become who he was supposed to become.

I don't typically believe many reviewers, but sadly what I had heard about this movie was true. It really didn't work out. It just struggled to much to find it's own originality and personality and got lost in it's own mythos.
recorded by AdventGeekGirl @ 6:26 PM

Email ThisBlogThis!Share to TwitterShare to FacebookShare to Pinterest
Labels: Movies