I teach sixth grade Literacy. I try to teach my kids to apply what they learn in Literacy class to real world situations and events. This year we have been learning Kylene Beers Notice & Note Signposts to apply to their fiction reading in an attempt to encourage deeper thinking about what they are reading. When notice one of the signposts, they need to stop and take note of it. Then they need to ask themselves a deeper question to get at the heart of what the author wants you to understand. 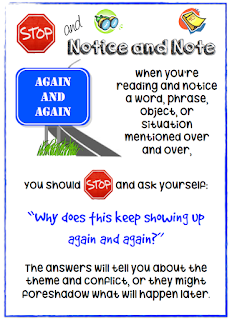 As I started to teach these signposts, I started to notice myself asking signpost questions in my everyday life. I would then use these real life examples in class to encourage my kids to take their thinking outside of the classroom and into their own lives. But last night, I had an Aha! Moment for a real life application to the signpost Again and Again.

When you're reading a book and something is happening again and again or a word is being used or a situation keeps being mentioned. . . whatever it is. . . if its coming up again and again, you need to notice it, stop, and take note. Then you are to think how could this help you understand the story deeper. Will it help you to understand the theme and conflict of the story? Can is help define a character in a deeper way? Does it provide a sense of foreshadowing to the story? My students were having trouble going deeper with this signpost.

While I was surfing the net after a long day shaping young minds, I stumbled upon Shia LaBeouf's #ALLMYMOVIES art instillation in NYC. He had rented out a theater and was watching all of his movies in reverse chronological order. While he did this, he was live streaming his viewing. 3 days he would sit in the theater and watch his entire body of work. It was free for people to come in and watch the movies with him, but he had taken an artistic vow of "silence" from people, but did still interact in some capacity. The essence of this is that we are watching him, watching himself.

As I sat there, watching the live stream, I thought to myself, "What message is he trying to send with this?" I was watching someone watching their own movies. Again and again, he would sit there as a new movie rolled out and the live stream would continue to stream. It felt very voyeuristic I thought about it for a while, but then went to bed.

The next morning, I woke up and found myself checking the stream to see if he was still watching. I don't know what compelled me to do it, but I did. Then it was off to work and while I was prepping my lesson for the morning, I had a stroke of genius: My students could try to figure out the meaning behind him doing this activity again and again.

I would introduce to my student Shia LaBeouf and his previous artistic endeavors, as well as the movies he's known for. Then I would explain the experiment. I would pose to them the question, "What is the theme (the message or lesson to be learned) in this artistic endeavor?"

Because, the point of art is to evoke a response, an emotion, or just a deeper level of reflection in our own lives, I wanted them to write a reflection on being part of this. So when I introduced this to my students, they all laughed and acted baffled and scoffed, but once it was on the screen, they were completely taken in by it. I explained that they were also taking part in the artistic act and have become part of the art that is being created. I took back-of-the-classroom-photographs to further validate the art.

Once they had watched for a little bit, I encouraged them to start recording how they felt and their feelings and what they think the point of all of this might be. Some of the students went deep and thought about the deeper implications of something like this, while others made it through the first step of why would this actor be watching himself, but couldn't make it to the next step of "what does us watching him have to do with it?"

They came up with some great observations and potential guesses for why he was doing this.

1. Shia LaBeouf is doing this because he wants to see if people still like him. He is looking at tweets on the internet and streaming stats later, as well as seeing, in person, the amount of people who come out to watch his work. He just wants to feel famous.

2. Shia LaBeouf is doing this because he is reflecting on his own body of work so that he can be a better actor.

3. Shia LaBeouf is doing this because he wants to encourage people to reach for their dreams, just like he did as a child actor. We're watching him experience the joy of reaching for his own dreams.

4. Shia LaBeouf is doing this because he wants us to reflect on how we treat celebrities and celebrities are just normal people like everyone else. He's also putting himself in the shoes of a normal person, by watching his own movies.

6. Shia LaBeouf is doing this because he wants to be a better actor and reflect on the things he likes about his acting and the things that are bad so he doesn't do them again. He let other people in so that he can see what they think is funny or good or bad, too.

7. I think this guy is crazy and too into himself.

8. Shia LaBeouf is doing this because he wants us to think about our own obsession with looking at ourselves through pictures and images and he wants to record the good and the bad of the experience.

9. This guy just wants us to think about our obsession with watching people on TV, especially in reality shows. He did this to try to stop reality shows from being mad, because it is wrong to spy on people.

10. He wants people to confront their own craziness by watching his craziness.

11. To give other people to chance to try to be crazy on camera, like that girl with the green hair who put the picture on his seat or the guy who you said was sitting behind him last night and is now sitting next to him all day.


These kids are 11 and 12-years old. Some of the thinking that came out of this was powerful and others were a bit more blase. It was such a moving activity and the kids just couldn't stop talking about it. They even realized how hard it was to not keep watching, like they were going to miss something important. I joked with one class that he is looking back at you. That really creeped them out.

The strange part was, they were unable to put into words why they kept wanting to watch. I asked a few of them and they were incapable of figuring out their own reason for watching this. Some of them said they felt a little inspired or they were thinking of how they viewed celebrities. Others said they weren't going to post pictures online anymore or they were going to stop watching reality shows, because this realized to them how creepy and stalker-like the activity was.

In the end, the lesson was a hit. The kids were engaged. The idea of going deeper was applied to real world situations. They will not forget thinking about the world around them as having meaning and having value beyond the surface. Will they apply that always? Probably not, but this art instillation or social experiment or reflective moment was powerful and its taking moments like this and sharing them with students that helps to make a more informed and powerful world.

On the flipside, my co-workers through it was crazy insane and just, overall, weird, that I would have used this. It was immediate. It was involving them in real time in something that was going on. Powerful beyond words.

This opportunity was magical and I am so glad I was able to participate and allow these discussions to take place. So proud of my students. 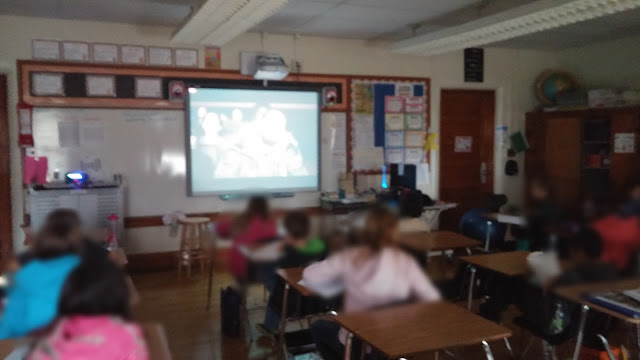