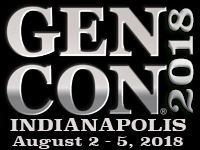 We arrived Tuesday night in Indianapolis, because on Wednesday (today) I participate in Trade Day. I present as an educator. I'm presenting my unit on how to incorporate games into, specifically, literacy. Too often I feel like people, or gamer minded people, tie games purely into math or history. I always make the argument that tabletop games ARE literacy. The reading, the writing, the understanding concept ideas, etc. Literacy is Life is what  I say. It's in everything we do. Speaking and sharing ideas. Listening to what others have to say and processing it. Reading for comprehension, and that doesn't just mean books. As an adult, think deeply about all the things you have to read and try to understand. 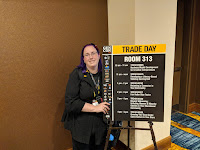 After much confusion and watching other people get confused, I was finally able to share my work. Lucky for me, we were in a pretty awesome room with a projector already (that was better than mine. I brought one from home, because last time I presented I had to). I had wonderful attendees. I talked really fast, because it's a lot of information.

I made packets of my presentation and materials for people so that the could follow along and if they had to leave, they could leave.  I also know how much educators appreciate things to work with. As for the presentation, I have never been so confident. I tried to turn on my teacher charm and we'll just hope my humor persona won out. My husband set up the games in the back for people to look at. I was proud. At the end I felt good and figured people mostly appreciated the presentation. So after my husband and I patted each on the back for making it through another presentation (which I seriously have to tweak), we abandoned all inhibitions and headed over to Burger Study.

This is where I break away from my Keto diet. But Sarah.... why would you do such a thing? Well... they have a Stranger Things burger that needed to be eaten, because YOLO. The burger was two thin burger patties with cheese inbetween a thin layer of peanut butter on one side and blueberry jam on the other and then all was settled between two perfectly toasted Eggos. Peanut butter burgers are overrated, but this was just right. The portions for everything were absolutely perfect and the blueberry jam really made it. Totally worth it! Only available for GenCon, though.  To add to this #genconfoodie moment, I decided to have a drink and it had BACON. That counts as keto, right? 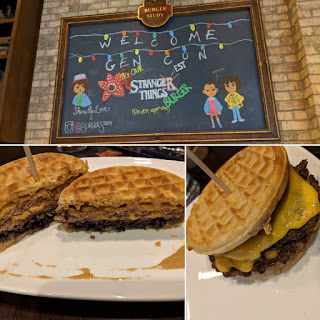 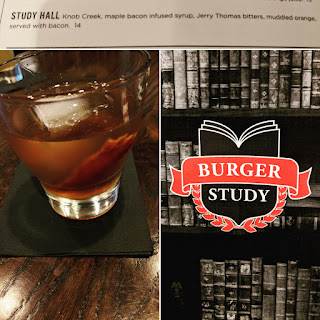 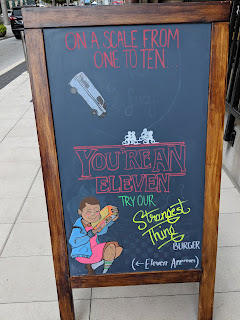 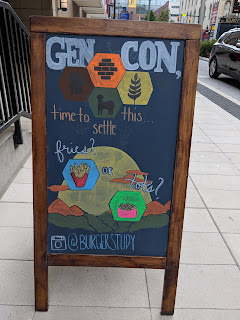 When we had left Burger Study, we headed around the corner so I could get my traditional GenCon pin from Hard Rock. See, I collect pins. Organizing them in display boxes is one of my next projects when I get home this summer. The pin this year was interesting, but didn't feel really GenCon-y. I'm not sure why I keep getting the pins, though, because they're kind of disappointing, but I hold a special place in my heart for them. 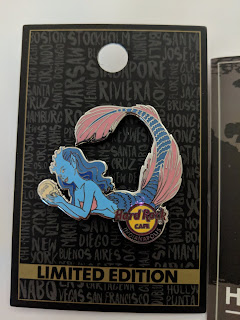 We saw, though, across the street from where we were walking, a game shop that had never been there before.  So on our way back to the convention center, we stopped in to see what it was all about and to see what kind of neat GenCon things they were doing. It's called Good Games. 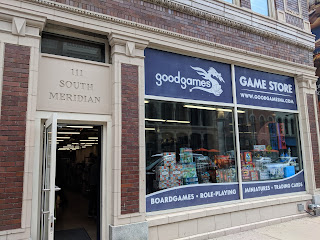 Tonight they're having an IELLO event and then during GenCon they're having late night hours and, I can attest to this, they have amazing air conditioning and a wonderful assortment of games. The were even hording copies of My Little Scythe.

My husband bought me Mr. Jack New York and I saw a copy of HABA's Dino World for our daughter. I also saw the Undead Expansion for Marrying Mr. Darcy, so I tossed that on the pile. We like to support local and small game shops, because what they're doing is creating an environment for gamers, as well as selling games, but at the heart of every game shop is giving people a place to game and a gathering place for people who want to game. 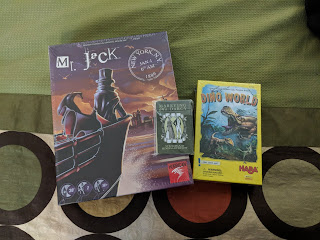 After this stop, I had taken note of this really interesting meter. It was a fundraiser meter for an organization that helps homeless people in Indianapolis. We pulled out some change and deposited it. 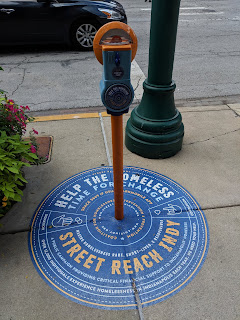 It reinforced the task I decided to take up when I can to Indianapolis. I remember seeing homeless people on the street when we have been to GenCon before. Not long ago, I saw something online about taking old bags and filling them with toiletries and things and handing them out the the homeless. Since I was purging my house, I organized some bags. Even this evening, my husband got into the charity spirit and we went and bought some water and food bars and found some amazing toothbrush travel kits for cheap. I organized 4 women's and 4 men's bags. 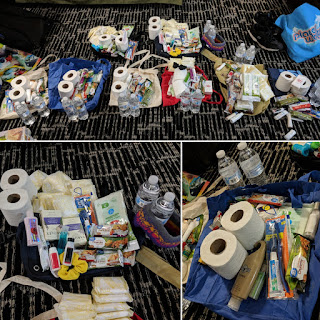 Each day I'm going to take one of each, but we're going to store them in our car during the day so that I can run and get one if I run out. We park in a lower level garage, so it doesn't get extremely hot. We're also going to keep a couple bottles of water on us to hand out to people we see, instead of money.

Our day wound down relatively early. I still had to review the game I was teaching for ConTessa Thursday night. So we were heading home, but not before I found out about Pin Bazaar 2018! It's like a pin treasure hunt-trade-set-collecting thing! Different places have different pins. Some you might need to purchase or make a product purchase to get. Some you could potentially trade for. It's pretty cool and worth checking out. I had to laugh, because I had just been writing about the Hard Rock pins and now there's this. I've made a list of all the ones I want, because I really need to curtail excessive spending. We have a budget. 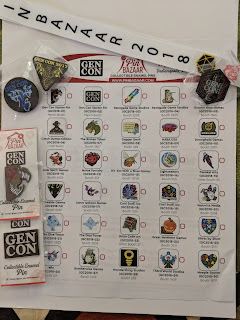 We spent the rest of the evening prepping the bags to pass out, going over the game I'm going to be running and just catching up. A few calls with our daughter (she's having an emotional time away from us) and just tried to prepare ourselves for tomorrow, which is always the most intense. It's the official Day One of GenCon 2018!