The Joy of Gaming: Fourth of July

I love theming out game events. I also find it interesting to look at lists of games that involve a holiday or a theme of some sort. When I was looking for games that I think fit the United States' holiday the Fourth of July, it became a little more difficult than I anticipated. My husband even kind of looked at me strange and turned his nose up at me. So I went off on my own and came up with a list I thought celebrated America or had a "patriotic" theme.

The first and most obvious was Hanabi (2010), because of the fireworks celebrations. After than my trail went a bit cold, since many of the games were more suited towards historical war games. Here's my stretch of a list that isn't too heavy on the historical war games.

1. Hanabi (2010)
This is the cliche, but obvious choice. That said, it's still a great little game. I even wrote a column on it many years ago for a Geek Girl PenPals and my Meet Me at the Table reoccurring column. 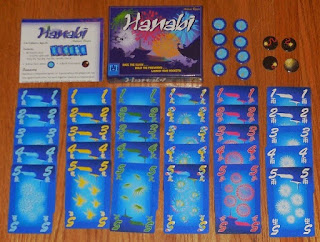 2. 1775: Rebellion (2013)
I think this one is pretty obvious. I mean... we're fighting for our freedom here people. This is an area control game set literally during the precursor to our Independence Day and utilizes four factions: The American Continental Army and Patriots against The British Army and the Loyalists. As with the real conflict, the armies are able to call on allies, such as the Native Americans and the French. Use cards to move your players into position and dice to quickly battle once you've found your perfect place of attack. There are some thematic elements that dictate the end of the game, but whoever has the most flags wins the game. Even if you're not into historical games, this one is worth a shot. I am not the best at area control, but my dice rolling is pretty sweet. 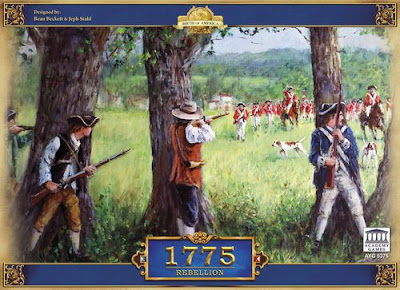 3. 1960: The Making of the President (2007)
1960 is about one of the most notable presidential elections in our American history. If you are unfamiliar with this election, you can get a crash course on everyone's favorite go-to reference, Wikipedia. The game is set between the beloved John F. Kennedy and the notorious Richard M. Nixon. As with 1775, this game utilizes area control, but also hand management to manipulate the vote and take the election. Who will make history and change the country for better or worse? 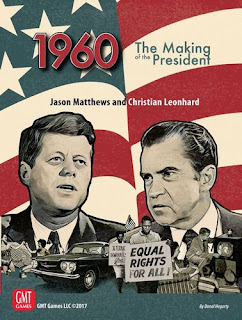 4. Discoveries: The Journals of Lewis & Clark (2015)
Thomas Jefferson, back in 1803, sent out two explorers to investigate just how far this new land stretched. Discoveries is thematically identical to its heavier card drafting sister, Lewis & Clark: Expedition (2013). Discoveries is a dice placement and set collection game depicting Lewis & Clark's (as well as Sergeants Patrick Gass and John Ordway) expedition to first cross the western portion of the United States. What makes the game particularly interesting is the unique way in which you use the dice. You have your own dice, but can gain neutral dice, as well as your opponents' dice. You have to spend dice to take actions and it's at this point that players can take the dice to add them to their own pool. Essentially, the game is about producing enough movement to claim the various mountain and river cards that represent the game's victory points. Obviously, it is a great fit for your holiday game pool. 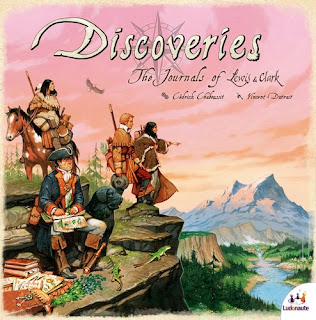 5. Freedom: The Underground Railroad (2012)
This part of our history is not one to look upon lightly and, maybe, definitely not during a celebration of our country. Freedom, though, shows us a slice of history where people who wanted to do the moral thing rose up and tried to preserve human life, regardless of their color. It was about what they represented. This is a cooperative game, which I love about it, because of the historical context.  Using cards that depict historical events and actions, you have to raise funds to maintain your network to move escaped slaves from the south to the safety and freedom of Canada. The goal is to end slavery, but just like in the Civil War, there are forces hell bent on stopping you, from slave hunters to politicians. The negative aspects are overwhelming and the final goal is harder to attain than you think. It can be an emotional journey, but really touches the heart of trying to change a horrible part of our history in America. 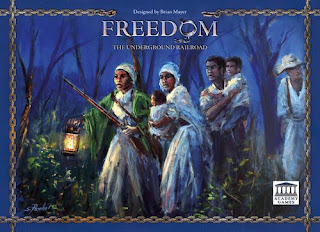 6. Legendary: Captain America 75th Anniversary (2016)
Would it be patriotic of me to ignore Captain America on this particular holiday? Legendary offers an expansion that focuses on Captain America and his crew to take down whatever evil pops up. It features Agent X-13, Captain America 1941, Captain America (Falcon), Steve Rogers: Director of S.H.I.E.L.D., and Winter Soldier. This cooperative deck building game is always something I love to breakout and play, so this holiday offered that excitement. Build your deck up from some basic S.H.I.E.L.D. cards and use the powers listed on the cards to destroy whoever the mastermind villain is (Arnim Zola and Baron Heinrich Zemo are included in this expansion). The villain is using some pretty intense henchmen and supportive villain groups (included are Zola's Creations and Masters of Evil [WWII]). Watch out for those scheme twists, though, as they will throw a wrench in your efforts to defeat the mastermind.

We typically like to choose our masterminds and his henchmen/villain groups randomly, so we don't always play with those expansion parts. I also made my own little patriotic group, so there's that option as well: Captain America, Spider-Man, Ms. Marvel, Patriot, and Agent X-13. 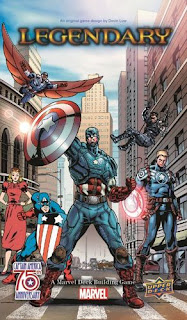 7. The Pursuit of Happiness (2015)
July 4, 1776 - "We hold these truths to be self-evident, that all men are created equal, that they are endowed by their Creator with certain unalienable Rights, that among these are Life, Liberty and the pursuit of Happiness." (Paragraph 2 of the "Declaration of Independence.") Sure it might seem like a stretch, but it's all in good fun. The Pursuit of Happiness is a worker placement game where you have to fulfill life goals. You live your life by finding a job, taking on hobbies, and even finding love. How do you define happiness? 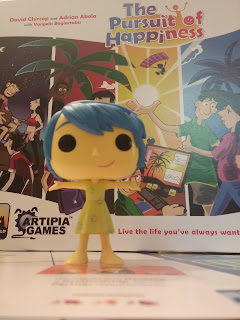 8. Road to the White House (1992)
So I know I said I'd try to keep the war games to a minimum, but um.... this is essentially a war game with a skin of the presidential election. Besides, don't they always compare political races to wars. Intense and time consuming, you are essentially going around the United States literally running a campaign. I'd like to think the publication year says a great deal about the complexity of this game, simply because older area control games have a tendency to be heavier and heavier and almost absurdly complex the farther back they were published. That's not to say there aren't heavy and complex modern games, but I think my assessment stands. In Road to the White House, you select a candidate and go through the entire process of conducting your election, finally ending with a vote in each state to see who the ultimate winner and leader of the free nation will be. Say goodbye to your BBQ plans, because this one is a doozie. 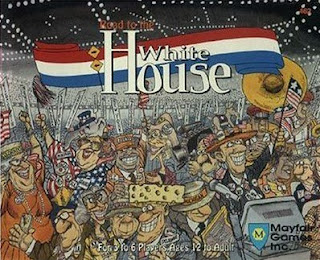 9. Timeline: American History (2014)
Put your knowledge of American history to the test. Place your cards along a timeline and try to guess the correct date. The order of events might not be what you remember from your history classes. As a sidenote, the students I am able to get to play the Timeline games are so dismissive of them, because they don't know the answers and can't get over the fact that it's a learning game and not about being perfect all the time. I love it, though, because I learn things I've never known before. Talk about understanding the acquisition of knowledge. 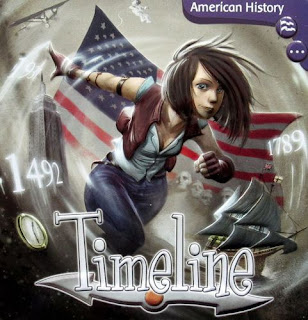 10. We Come in Peace (2016)
I thought about adding in an alien game for fun (Independence Day (1996)?!?!) and just couldn't help myself. This rather quirky game from Rather Dashing Games, this is one of the games that I use to teach my students about the mechanics of press your luck and take that. You have a planet that you must take care of. Others roll dice to try to take control of your planet. Flying saucers attack your cities and you have to defend them and rebuild. The superior aliens will be those with the least damage at the end of the game. I'm going to assume that was Earth in Independence Day, because we weren't taken by the aliens. ha! 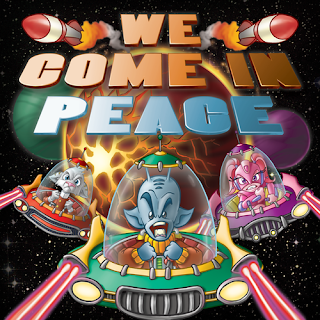 So enjoy and have a happy 4th of July! 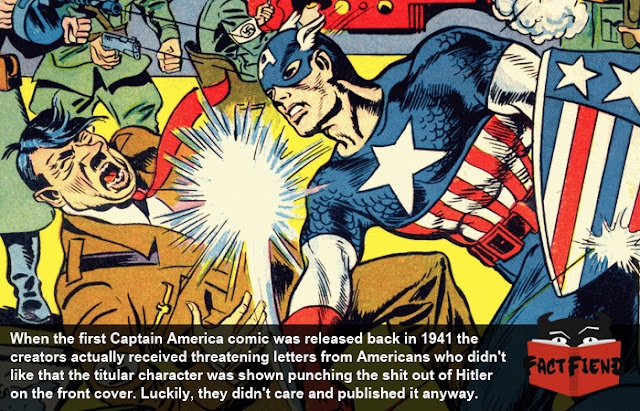