The Joy of Gaming - A Tween Lock-In

I know I've mentioned it before, but I run a Middle School Tabletop Game Club. The dedication of my students varies, as it is something we try to do during a lunch hour and it has slowly become something of a social club with gaming, but it's something. Staying after school is difficult due to student commitments and modern youth mentality, so lunch is our only real time to game.

Typically we go to local conventions and things like that, but this year my husband proposed trying to do monthly lock-ins with the members in my club. So after the busy start to the school year and the hassle of the holidays, we started our lock-ins in January.

The first one went pretty well. Not all the club members could come, but we had around 9. This time, we have 12. You wouldn't think 3 kids would make a difference, but oh my goodness... it really does. But already we're planning our third lock-in in March.

What I find hilarious is that everyone keeps telling us how crazy we are, but it really isn't a big deal. Yes, there are so many reminders to be quieter, but in reality that's the only problem. Overall, these kids as quite wonderful and well-behaved. Sure, it can get stressful or exhaustion can cause a few issues, but both times we've had so much fun.

Here's our collection of games that we brought (some from my club vault and some from our home): 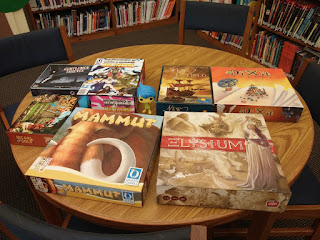 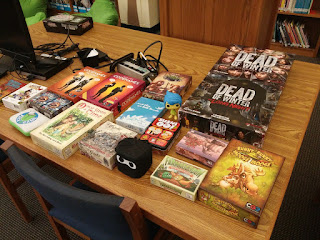 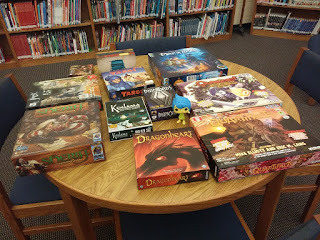 Tonight things started out a little slow. We were waiting for food and we had kids who were straggling in.  Plus I was waiting for my husband to lay out the plan for the evening. After everyone was fed, games were laid out, snacks were offered, and rules were established, everyone dug into the games.

The evening started off strong, though, with games being broken out. Things only really breakdown towards the midnight hour when, for many kids, their brain cells aren't into the heavier games and they are just existing on adrenaline from being silly. So we tried to get some of the games we were the most psyched about in the works immediately.

Kodama: The Tree Spirits (2016)
Such a cute game of tree creation. It was anyone's game until the very last season and the final Kodamas. I did forget the one rule about no more than 10 points a branch, but as long as we all adhered to the mistaken rule, it was still fair. Overall, it was fun and we had some great laughs. Hoping it can be a game I bring in again to play at another lock-in or in club. It went relatively quickly, because the kids were focused and weren't being too obnoxious yet. 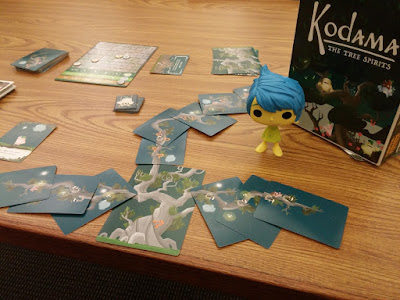 Incan Gold (Diamant) (2005)
This game is always a winner with the kids. That risk taking factor of leaving or staying to get the jewels gives it that extra competitiveness, because the kids try to figure out what their friends are going to do. The game is so enjoyed that we actually feel we need a new copy, because the cards on this one have become pretty warn. That wouldn't be a horrible thing, because then I can give the overly worn copy to the actual club, where they can play it forever! Every time we break out this game, it bunches of fun. 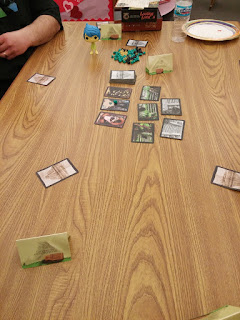 DragonSlayer (2014)
Another oldy-but-a-goody. I sometimes, sadly, have to take this one out of the vault, because kids will ONLY pick this up, instead of playing one of the other 100 games that are available to them. I don't like having to put up games, but it's a game club and part of it is experiencing new games and not playing, literally, the same game every single day for the whole school year.  Suffice to say, it is one of my favorite smaller games and I love and adore it. So I'm always happy to take a minute to show them how the game is played. 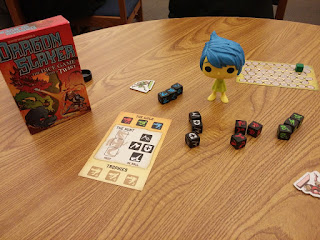 Mammut (2011)
My husband is wary about trying negotiation games with the kids because it's a tricky game concept to wrap your head around, but Article 27 went over so well last month that he was very happy when kids voted to play this game at this month's lock-in.  Most of the kids seemed to have a blast stealing tiles from one another and trying to decide when enough was enough. Towards the end of the game, one of the girls even said how the game reminded her of the way Article 27 felt and Ray was very excited at the connection. 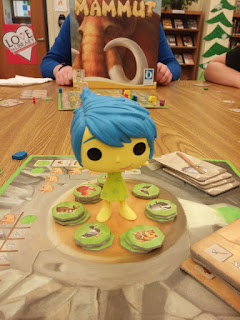 Mr. Jack (2006)
I love Mr. Jack. A great two-player game that takes skill and forethought. My kids loved it and I saw them picking it up off and on throughout the night. 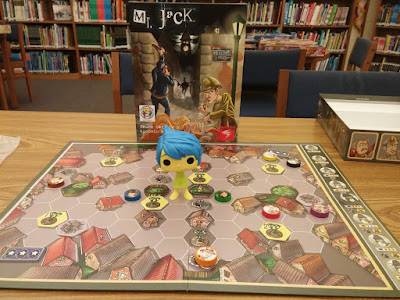 Quarriors! (2011)
I love dice games, so it was exciting to get to pull this game out and introduce it to a new group. The two boys I played with loved it. So much so that one tried to teach it to another student, but sadly it was still a bit too complex for him to teach it. I didn't get to play it again during this lock-in, but I intend to bring it with us again. 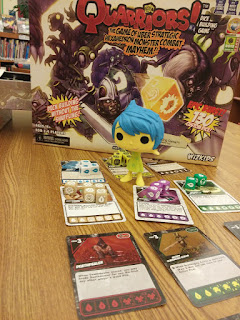 Bears vs. Babies (2017)
The kids played this a few times, because one of my kids got it as a Christmas present and wanted to bring it to share. I feel like this is one of those games you shouldn't let the kids play after midnight, because they turn into gremlins. 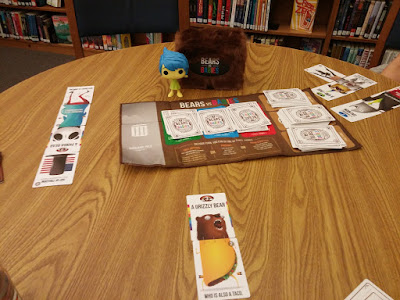 Dead of Winter (2014)
Oh my goodness.... this was crazy fun and crazy insane. We took out questionable content to play, but we seriously had a good time with this one. AND... SHOCKINGLY... We actually beat the thing! That always helps win people over. It was challenging, but we were able to succeed in the end... even with Felicia Day and Sparky (the wonder dog) - there's a Felicia Crossroads... so that was our inside joke. Definitely want to break this out again! 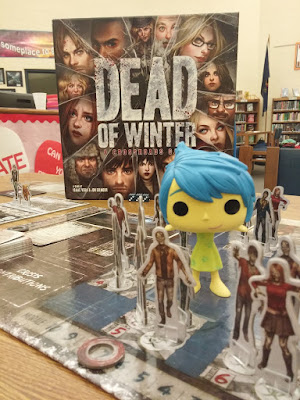 Exploding Kittens (2015)
I will refrain from commenting on this particular experience and Joy did NOT make an appearance. They LITERALLY played it behind my back while I played Dead of Winter. Sneaky little monkeys.

Magic: The Gathering – Arena of the Planeswalkers (2015)
A student of mine brings this game. At the first lock-in it was the source of all the behavior problems, because the kids were doing this weird leave-the-table-go-to-a-far-corner-strategize thing. It was very disruptive and immature. It also attracts the kids who are a bit too loud for their own good. For example, when we were playing Dead of Winter on the other side of the library, they were so loud I could barely concentrate on the Crossroads card being read to me. In my attempt to find a more poignant way to show them how loud they were being, I had all of my Dead of Winter kids talk just as loud as them. It drove my husband nuts, but it made the point. I don't mean to be anti-gaming-excitement, but some of these games are inciting behavior that would make any gaming-convention-goer flip a table in rage. So I might be kaboshing this particular game after two lock-ins worth of too-many-reprimands to be respectful to other gamers in the library.

Star Realms (2014)
We have two copies in our club vault and I don't typically see it pulled out to play often. I've seen it a bit more recently being played. So between the morning breakout session of Yu-Gi-Oh! while waiting for parents and a few short rounds of Star Realms attempted throughout the evening, I think our next lock-in will start with some CCG and those who don't have Magic or Pokemon or Yu-Gi-Oh! (for example) can play Star Realms. That way they're mostly playing with their own games and can still eat and play right away at the beginning. I dunno... it's an idea.

Dixit (2008)
This was what the students voted on to be their party game of the night. The previous lock-in was Concept and this was a real hoot. Some of the kids had forgotten we played it a few years ago and I know it's been brought around them since then (I think that our International Tabletop Game Day event), but they were really familiar with Dixit Jinx! The subtle art of giving hints was lost on some of them, but overall it was great and will definitely find it's way to the club table again soon. (No Joy picture... it was so late in the night, I forgot to make sure the kids weren't in the picture...)

Elysium (2015)
My husband was so excited to play this and he had a little crew who signed up. It was quite an interesting game to watch at 2:30AM. 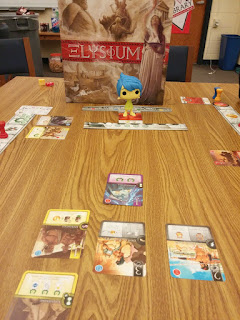 ...and then, we held hands (2015)
A boy in my class was getting ready to go to bed, but I quick pulled him over for a 2-player game. I figured this would maybe catch his interest and wouldn't take too long to play. Sure enough, he caught on quickly, but he stopped me from making a negative escape from my double positive. Hopefully it was enough for him to take it out of our game vault to get someone else to play. I know the excessive draw of the games where they can be loud and all of that, but I like the strategy behind the game as it gets more difficult.

I pretty much don't know what was played after that. I decided to attempt to sleep. I didn't have this problem at the first one, but um... overly tired girls are giggly and crazy!  Apparently the shenanigans of tween boys and girls were in full effect in the girls' room and the boys' room. Summer camp it is!

The morning was as usual. Sleepy little campers. Weird noises. Worm-like movements. Flipping, flopping, and lethargy to a degree that is not shocking to any nerd who stays up late enjoying nerding. There were plastic cups everywhere - some with drink left in it - and there was even the token 2-slices left. 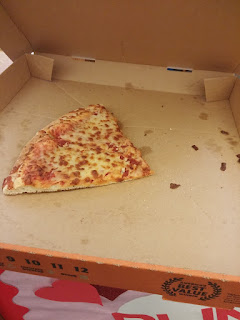 Leaving, I felt like it had been at some sort of college rager, but really it was a good time. We have some things to work out with the kids and the parents (if I'm being honest), because it just created and added to stress to an already stressful and coffeeless morning. I just want to footnote here and say I am not your child's maid and they are responsible for cleaning up their messes, especially since I ate NONE of the food that I see strewn on the floor and tabletops. We are given this space as a "gift" and it should be respected of we'll be asked not to come back, even if it is my school's library.

Next one is coming up fast, so we're already in the works on things to improve, games to bring, and other exciting additions.